Key-words
Basilica - Church - Numismatics - Mosaic - Metal - Stone - Glass - Religious building - Public area - Cemetery - Sanctuary
Type of Operation
Excavation - Rescue excavation
Institution
5th EBA
Toponym
Sparte, Sparta, Lakedaimon, Lacedaemon
Linked Record
2008
Report
Sparta, Alkmanos Street (O.T. 128, property of Mpimpa-Spyridakou). Aggeliki Mexia (5th ΕΒΑ) reports on the discovery of an arch in a SE orientation which belonged to a building which was internally decorated with a floor mosaic (Fig. 1). The arch was three-sided externally and semi-circular within. Although solid it was not carefully made, built with rubble, fragments of bricks and abundant mortar. Based on the higher level of the mosaic floor, the excavator believes that the arch was part of the foundation of the building. On the southern side of the arch was a wall (Τχ2) with a SE-NW orientation and of a similar construction. Other excavated walls were older than the arch.
In the eastern part of the excavated area were 15 graves, all aligned on a NW-SE axis. Most were cist graves of rectangular shape with floors of soil, their long sides made of rubble and plinths and their short sides of roof tiles or stones placed vertically. The western edge of a single grave which had a spolia roof, formed part of the northern side of the arch described above. In a few cases the graves were simple pits dug into the soil or through the mosaic floor. The graves usually contained multiple burials and had no grave goods, with at least one belonging to a child.
The mosaic floor covered the area of the arch, a central space to the west of it and two lateral area to the north and south. It was decorated with floral and geometrical motifs as well as with a cross. The mosaic tesserae were made of mid-sized pieces of stone placed on mortar base using the opus tessellatum technique. The choice of motifs and colours point to an Early Christian date (end of the 5th to the beginning of the 6th centuries A.D.). Its construction was inspired by Athenian workshops but it was executed locally. The excavator believes that the arch was part of an Early Christian basilica, while the walls identified underneath were of the Roman period.
Additional finds included Roman and post Roman pottery, metal and stone objects, amorphous glass pieces and seven bronze coins.
Author
John BENNET
Bibliographic reference(s)
ADelt 63 (2008) Chr., 355-358.
Date of creation
2017-10-29 00:00:00
Last modification
2019-08-13 10:17:45
Picture(s) 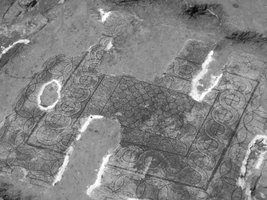