Key-words
Wood - Cemetery - Material Type - Site Type
Type of Operation
Excavation - Rescue excavation
Institution
Ephorate of Antiquities of West Attika, Pireus and Islands
Toponym
Phaleron Bay
Linked Record
2016
Report
Phaleron, Stavros Niarchos Foundation Cultural Center. Stella Chrysoulaki (Ephorate of Antiquities of West Attika, Pireus and Islands), Anna Alexandropoulou (Ephorate of Antiquities of West Attika, Pireus and Islands) and Theoseveios Aggouras (Ephorate of Antiquities of West Attika, Pireus and Islands) report on continuing excavations at the cemetery in Phaleron. Parts of this cemetery were revealed in 1911-1915. Excavations since 2012 showed that the cemetery dates from the middle of the 8th until the 4th c. B.C. 1,069 burials have been excavated in total: 587 pit graves, 358 inurned cremations, 88 pyres, 9 cist graves, 11 larnakes and 15 animal burials (Fig. 1). The burials are located close to each other, making this a particularly dense cemetery. There are no discernible patterns in either the orientation or the position of the bodies. The burials had many offerings dating from the Late Geometric to the Classical period. In addition, numerous imported pots were found; Corinthian, from eastern Attica and Euboean. The skeletal material attests to a high children and infant mortality rate as well as to medical conditions resulting from strenuous, manual labour.
Of major interest is a burial of 80 male adults, many of whom had been thrown face down in the grave (Fig. 2). 36 of them had their hands tied with metal restraints (Fig. 3). Some of them had their hands and legs tied behind their backs, and other had their hands tied at the front. Two small vessels found amongst the dead date this burial in the third quarter of the 7th c. and Chrysoulaki suggests that their violent deaths may be related to the Kylonian pollution.
Chrysoulaki notes that there are three types of violent deaths present in this cemetery. The first is represented by the aforementioned burial, also referred to as the Δ group (Δ standing for desmotes, i.e. captives). The second was found by Keramopoulos in 1915 and consists of 17 men, who were tortured prior to being buried. These men had their necks, hands and legs attached to wooden planks. After their deaths, they were buried together with these planks. The third group consists of men who were killed or injured in combat and thrown together in the same pit. One of them had been shot with an arrow in the knee.
Another important find from the cemetery is a burial in a wooden box. Due to the quality of the sediments in the Phaleric delta, the wood was preserved (Fig. 4). In addition, two couples were found that were buried together holding hands (Fig. 5). Finally, the burial of a woman who died in childbirth was revealed. The head of the infant had come out of her womb whilst the rest of its body remained inside her.
Author
Chryssanthi PAPADOPOULOU
Bibliographic reference(s)
Ministry of culture press release 14/4/2016, Proto Thema 5/3/2017, Kathimerini 7/2/2017, Emerisia 7/2/2017, Eleftheros Typos 7/2/2017, Ethnos 7/2/2017,
https://www.snfcc.org/construction/archaeological-findings/?lang=el
Date of creation
2017-07-25 00:00:00
Last modification
2018-08-22 09:24:50
Picture(s) 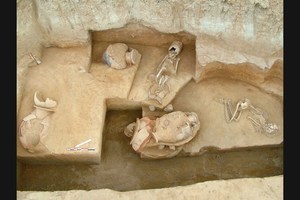 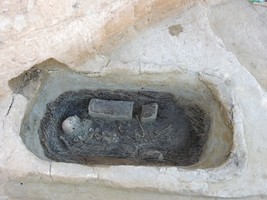 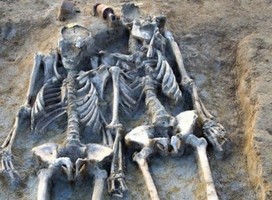