Work in 2016 concentrated on the EM and MM cemetery, the Neopalataial monumental building with central court and within the Postpalatial courtyard of Building CD. A georadar survey by A. Sarris (IMS, Rethymnon) focused on the summit of the hill as well as the terrace north of Building CD. Especially in this last area a series of wall alignments were identified which looked promising for further exploration. In the cemetery, work continued in the west sector around Burial Building 9 where several bone deposits as well as pithos burials were excavated.

Within the courtyard of Building CD, a dense sequence of stratigraphical layers was recognized, covering most phases of the Bronze Age, with substantial pottery deposits of MM IIIA and LM IB. Most work, however, took place in and around the large plastered court of the Neopalatial Ceremonial Centre of which the exploration had started in 2015 (Fig. 1). Thus far the court’s length is more than 30 m but its south border has not yet been identified. Its width varies between 9.60 m to the north to 15.40 m halfway down. Very little material was found on the court but more or less in its centre is a burnt circular feature with a diameter of c. 90 cm, preserved up to 25 cm high (Fig. 2). It was found filled with ash, charcoal and stones. Its function remains unclear (oven? Lighting device?). The ashlar facade along this court to the west was further revealed, showing a first course in limestone and a second in sandstone. Blocks fallen from this facade were found on the court. Tests were made at several spots around the court: that to the east revealed architectural remains that form the continuation of the east wing, part of which had been explored earlier (2008-2011) as Building F. This yielded Neopalatial pottery. To the west, a test revealed a layer with redeposited Santorini ash and Neopalatial sherds, perhaps explaining why the complex was abandoned. Within the west wing proper of the complex, more Prepalatial deposits were encountered including a concentration of more than 600 obsidian flakes. These should be connected to the more extensive Prepalatial remains found already in 2015.
Author
John BENNET
Bibliographic reference(s)
Unpublished field report, Belgian School at Athens (J. Driessen).
Date of creation
2017-07-12 00:00:00
Last modification
2018-08-22 09:24:50
Picture(s) 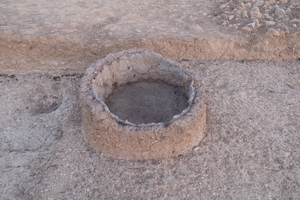