Key-words
Public building - Residence - Public area - Domestic space
Type of Operation
Survey
Institution
British School at Athens
Toponym
Knossos, Knosos, Cnossus, Cnossos
Linked Record
20052015201620172018
Report
Knossos Roman Geophysics. Daniel Stewart (Leicester/BSA) and Jennifer Baird (Birkbeck/BSA) report on a second season of geophysical survey focused on Roman Knossos in order to generate a working knowledge of its urban layout to aid the understanding of extant remains and facilitate the study of the extensive collection of Roman material culture from BSA excavations retained in the Stratigraphic Museum. The 2016 season had six main aims: continued use of magnetometry over the broader survey area; targeted use of ground-penetrating radar (GPR) and resistivity in areas of promising results; systematic GPS mapping of known standing remains; further refinement of the orthogonal plan in the north sector of city; further exploration of the acropolis slopes; and further exploration of area surrounding known tombs. All aims were largely met, with the exception of the second, due to funding limitations.

The same equipment was used in 2016 as in 2015 (see 2015 report). Once again data collection involved laying out 30-by-30m grids, of which 110 were covered, an area of around 6ha in 16 different areas (Fig. 1). Less total area was covered than in the first season, but it was possible to focus on larger contiguous blocks.

Despite the challenges arising from the difficulty of distinguishing between kouskouras bedrock and architectural blocks and mortars formed of the same material, often within a soil comprising disintegrating kouskouras, some preliminary observations are possible, already modifying somewhat interpretations developed last year (Fig. 2). It now appears likely that the Roman-period city had at least three different orientations, each determined by a combination of topography, landscape use history and orthogonal intervention (Fig. 3). The slopes of the acropolis hill (Monasteriako Kephali), referred to as orientation Type A, display significant evidence of ancient terracing which creates a local topographic layout for this portion of the city. Little area was covered here beyond that in 2015, but the results suggest the slope is ‘busy’ with structures and that the high density of surface material cannot all be wash from the hill above. This area is an excellent candidate for more intensive investigation with resistivity and GPR in future.

Type B, the area north of the Villa Ariadne, including the Villa Dionysus, exhibits a more typically orthogonal arrangement that is orientated broadly north-south, and associated with planned settlements. Given that these are some of the broader, flatter parts of the valley, this is perhaps unsurprising, but this is also the area with the most substantial standing remains, including some significant excavations (the Civil Basilica, OTE trenches, Knossos2000 project and the Villa Dionysus, among others). The project’s efforts make it clear that there is substantial evidence of regularity (if not outright orthogonality) in this sector of the city: there is evidence of streets, street intersections, and buildings with individual rooms (or courtyards) in some cases. Within this regularity, a curious anomaly is the alignment of the Civic Basilica, which is displaced slightly to the northwest in relation to the orientation of other structures.

The area to the south of the Villa Ariadne, and to the east and north, Type C, has a similar orientation to Type A, but along a more northeasterly-southwesterly line. This region also contains a broad range of standing Roman concrete remains, some related to water management (aqueduct segments or fountains). The alignment generally conforms to the topography of the valley and the underlying, earlier terracing – some of which may well be Minoan in origin – raising interesting interpretational questions about knowledge of the site’s earlier past in the Roman period.

Investigations focused specifically on the Makryteichos wall (KS 86) and fields adjacent to the Villa Dionysus produced intriguing results. In the former case (Fig. 4), the presence of two long magnetic anomalies parallel to the existing wall seems to confirm the hypothesis of Hood and Smyth that the structure was part of a very large stoa. The latter area revealed structures directly associated with the Villa Dionysus immediately to its west and north, as well as a substantial east-west road. These results suggest that this was an area of substantial Roman housing, perhaps with public bathing establishments.

Overall the 2016 results demonstrated that significant areas of housing, buildings, and streets can now be reconstructed in part through geophysical survey. The area known as the theatre (KS 110) cannot be a stadium or amphitheatre, as proposed in some secondary literature.
Author
John BENNET
Bibliographic reference(s)
Unpublished field report, British School at Athens
Date of creation
2017-07-12 00:00:00
Last modification
2021-02-21 08:34:32
Picture(s) 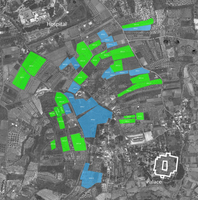 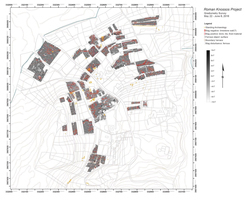 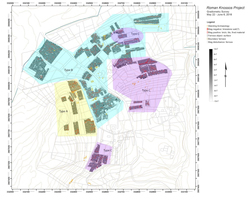 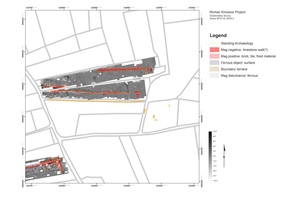