Building activity started almost immediately after the destruction of the palace. The area was divided into rectangular units, arranged either parallel or at right angles to one another, in which were created both roofed and open-air spaces. The orientation of the walls remained consistent throughout the period of habitation. In structures of the first horizon spolia from the palace were used: a cut-stone block of a type known so far only in the ‘bathroom’ in the palace, used either as a threshold or a stone stair-step (Fig. 4); and a block of lime-sandstone with an incised mason’s mark on its upper side (Fig. 5), reused as a pillar base in a building already uncovered in 2014 that had internal rows of columns. Also found in this space were 2 ivory inlays in the form of a lily and a papyrus, perhaps from a piece of furniture from the Acropolis (Figs 6-7). Discovery of a mould for bronze sickels in another space implies the production of metal objects (Fig. 8). The first horizon came to an end with a fire destruction at the end of LH IIIC early, depositing concentrations of ceramic vessels and other finds in rooms and open courts. Among these, inserted in a clay bench in a courtyard, was a wheel-made clay situla with grooved decoration at the neck and base, unique in Greece, which probably belongs to an Italian ceramic tradition (Fig. 9). In another location within the same courtyard was found in the destruction debris a boat model (Fig. 10), while in a backyard antlers and a kylix were encountered on a stone slab (Fig. 11).

After the destruction deep cuts were made into the older habitation horizon, which led, in the second horizon, to a noticeable reduction in the roofed areas and an increase in open-air spaces. To this phase also belongs the use of 3 ovens, used in succession, which appear to have functioned for food production, not manufacture. The discovery of 5 kylikes deposited in the largest oven (Fig. 12) links food production with the consumption of drink and, in the excavators’ opinion implies ritualized consumption, reminiscent of the ritual vessel recovered in the previous year’s excavation. 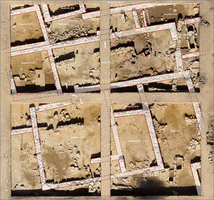 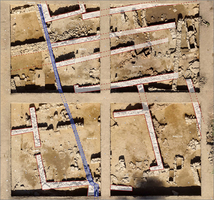 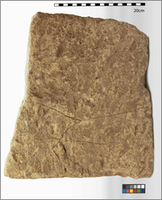 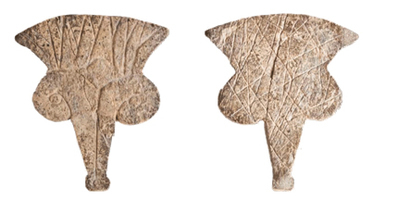 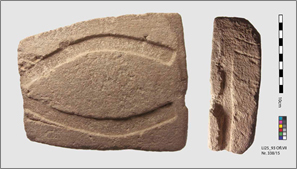 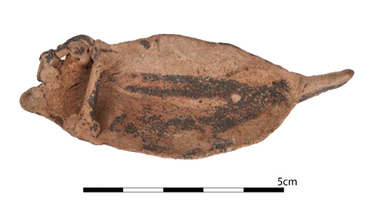 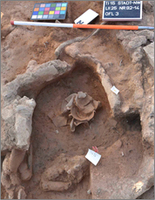