The focus was on the large building complex located on the Threpsiades property, first investigated by the Archaeological Service in 1976. The complex is located along the modern highway and ca. 50 m northwest of the south mole of the harbor (Fig. 1). In 2015 we nearly finished clearing of vegetation and loose garbage from the 1976 trenches was almost completed, clarifying the plan of a building that measures ca. 41 m N-S and at least 26 m E-W, although the walls continue far under the highway, probably up to the quay wall of the ancient harbor. The building’s plan consisted of a peristyle court bordered by a wide corridor to the W and at least eight rectangular rooms. There is a secondary entrance along the SW exterior wall and a large stairway up to a second storey (Figs. 2, 3). The architectural members indicate the presence of an Ionic colonnade in the lower level of the peristyle and a simple arcaded second storey with Ionic impost blocks. Certain features indicate a secondary phase of rebuilding in Late Antiquity, perhaps after a destruction event (seismic?). The function of this building is uncertain, but its monumental scale and rich decoration suggest to the excavators either an impressive, centrally located private residence or a grand public facility.

Study of this important structure also involved ongoing examination of finds recovered in 1976, now stored in the Isthmia Museum. The building produced an enormous quantity of pottery and diverse glass vessels, lamps, and metal. A large majority of these finds can be dated to the late 6th to early 7th centuries AD, including Late Roman Amphora types 1-5, African and Phocaean red slip vessels, stemmed goblets and flasks with flaring rims, cylinder-blown window glass, and late African and Corinthian lamps (Fig. 4). The presence of so many amphorae, along with numerous stoppers and funnels, suggests that this building was involved in the large-scale distribution of transported commodities during its final phase, which continued into the Early Byzantine period. The building seems to have come to a sudden end, perhaps in a catastrophic event. 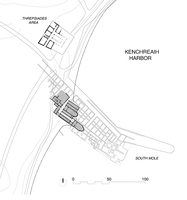 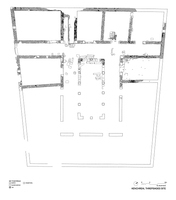 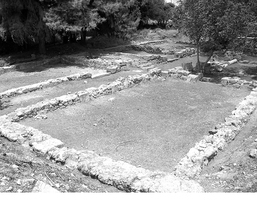 Fig. 3/ Kenchreai, building complex in the Threpsiades area, viewed from south and west. 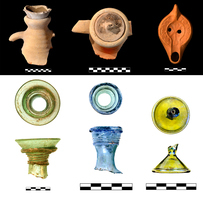