Key-words
Residence - Plant remains - Domestic space - Building Type - Material Type - Site Type
Type of Operation
Excavation - Research excavation
Institution
British School at Athens, Ephorate of Antiquities of Herakleion
Toponym
Knossos, Knosos, Cnossus, Cnossos
Linked Record
201020112014201520182019
Report
Knossos, Gypsades. Ioanna Serpetsidaki (Ephorate of Antiquities of Herakleion), Eleni Hatzaki (Cincinnati), Gianna Ayala (Sheffield), and Amy Bogaard (Oxford) report on the second season of this collaborative project whose overall aim is to reveal a Knossian neighbourhood by uncovering fine-grained data on consumption, the nature and role of agricultural production and broader issues surrounding the emergence, maintenance and decline of the Knossian urban elite. The primary goal of the 2015 season was to focus on the excavation of the Late Bronze Age building (Building 1) partially investigated in 2014, completing the excavation of the high-priority burned deposits in Space 106, defining the building’s extent to the north and east and investigating its chronology, development and abandonment. The secondary goal was to explore further the Middle Bronze Age building to the west of Building 1 and investigate further the area of Trench 5, where illegal excavation had taken place, with a view to comparing excavated results with the geophysical results from 2010-11 (Fig. 1).

The north and east limits of Building 1 were defined by single course foundations (krepidoma) in re-cycled ashlar associated with an LM IB-LM II construction phase, resting on walls of different construction style and Neopalatial and/or Protopalatial in date (Fig. 2). A southeastern extension to the building can be ascertained, but further excavation is needed to clarify if it was added during the LM IB-LM II construction phase or earlier. The south façade of the building had already been exposed by Hood in the 1950s, whereas more of the west façade, extensively robbed since antiquity, was revealed in the form of a single course foundation of smaller blocks. The footprint of Building 1 (without the southeastern extension) is estimated to be about 105m2. Two tests were conducted outside the façade walls to clarify its earlier phasing (Fig. 3). One, to the north, revealed what seems to be a fairly homogenous and perhaps single dumping episode consisting of fairly large pottery fragments tentatively dated to MM IIIA (possible site clearance), while the other, to the east, revealed a sequence entirely different in nature and stratigraphical date. The earliest architectural remains belong to the poorly preserved walls of a MM structure with associated ceramic material. Along the northwest end of the test, a wall made out of recycled dressed stones in limestone and gypsum was excavated, perhaps the corner of a separate building. The area in between the two walls revealed a sequence of successive depositions dating to LM IA and LM IB, containing a high percentage of broken fine tablewares and bioarchaeological material including animal bones in higher quantities than in other areas excavated and wood charcoal, suggesting successive midden depositions. Further excavation is needed so as to clarify whether these middens should be associated with the wall or with Building 1.

Tests within Building 1’s interior revealed a consistent stratigraphical picture: the interior of the building was stripped of any and all traces of earlier material and associated activities down to bedrock, which at some point in the building’s earlier history had served as a floor surface. This stripping included the removal of architectural features (perhaps doorjambs), which in certain spaces left behind deep rectangular pits in the bedrock, and included the nearly wholesale removal of red plastered floors, faint traces of which remained visible in some locations.

Evidence for the last use phase of the building in LM IIIA2-IIIB early, which ended with fire, comes from the south end of the building, including space 106 (Fig. 4). Excavation in Space 106, a large burned room containing a LM IIIA pithos and clusters of carbonized pulses partly excavated in 2014, continued down to the level of the earth floor. Open plan excavation and the number and positioning of cross sections were determined by geoarchaeology and bioarchaeology. Tests below the floor are pending to define the room’s full architectural and occupational sequence but also to clarify its architectural layout. On current evidence the room is defined to the north by a long, uninterrupted and well preserved rubble wall, to the south by two rooms excavated by Hood in the 1950s, and to the southwest by a partly excavated corridor like space, possibly at least one of the entrances to the building, while on current evidence the nature of the east end of Space 106 is difficult to determine. At its floor level space 106 was found largely empty apart from the lower half of a large LM IIIA pithos with relief decoration found in situ, resting in a circular depression cut within the earth floor and flanked by two smaller circular depressions, presumably intended for smaller vessels, which were found empty and filled in with the same reddish destruction material as adjacent parts of the room (Fig. 5). A champagne cup and a juglet were found on either side of the pithos. The destruction fill of the room was uneven in nature: the west half bore the clearest signs of burning, while in the eastern half traces of burning were patchy and far more uneven and intermingled with rubble; here also a reddish soil of uneven texture was associated with pottery dating to the Neopalatial, perhaps representing disintegrated building material. The bulk of the LM IIIA2-B early ceramic material seems to be associated with the grey, ashy rather than the reddish soils: a small storage vessel fallen upside down and a smashed but dispersed amphoroid crater with octopus decoration were found in the fill of the room, presumably fallen either from an upper floor, or from perishable containers suspended from the ceiling. Nearby a fragmentary limestone slab was found also collapsed at an angle among reddish soil but capping a patch of greyish ashy soil containing carbonized pulses (Fig. 6). The clusters of pulses excavated therefore do not seem to have been stored in clay containers but rather in perishable ones and this is corroborated by the archaeobotanical analysis. The different angles in which soils, artefacts and ecofacts were dispersed along the west half of the room suggests perhaps that the collapse was affected by something located at a higher elevation. Further study of the stratigraphy, architecture, and pottery is necessary to clarify the date and architectural arrangement of space 106, in combination with the results of geoarchaeology and bioarchaeology, to define the sequence of events, which led to its destruction, collapse and abandonment. In the meantime, provisional analysis of the archaeobotanical remains suggests dedicated storage of various pulses (grass pea, lentil, Celtic bean, bitter vetch, and pea) in perishable containers, perhaps baskets or skin bags.

Trench 8 was opened immediately northwest of Trench 1 leaving a 1m baulk between to investigate the MBA building first discovered in 2014. Although a clear understanding of the structure was not possible in the time available, a test revealed well-preserved building remains dating to MM IIIA, with evidence for an earthquake destruction corroborated by a rubble wall tilting. None of the areas so far excavated is associated with fire, a situation similar to space 107 excavated last year, possibly belonging to the same complex. The area of trench 8 had been subjected to unsystematic excavation in the past, most likely by D. Hogarth in 1900 as part of the numerous tests conducted on Lower Gypsades.

Finally, trench 5 was positioned immediately next to a modern robbing trench within the wooded area to the north to assess the damage made by cypress trees to stratigraphy and architecture, to define the occupational sequence in this area and to associate this newly excavated area to results of the 2010-11 geophysics, which had defined a square feature with no internal divisions measuring roughly 30m by 30m in this location (Fig. 7). The earliest architectural features are associated with MM II material: a wall in dressed masonry founded on bedrock, most likely associated with a limestone drain buried under an MM II level, which contained five fragmentary plain clay female figurines that morphologically resemble types found in peak sanctuaries. Immediately to the north a wall constructed of re-used ashlar blocks was founded within a wide cutting into the bedrock at a lower level; the cutting is associated with Neopalatial and a few post-Bronze Age ceramics. The entire area of the trench was covered by massive but fairly homogenous fill of rubble and chipped stones stratified directly on bedrock and below topsoil, delineated by a semicircular single course rubble wall running EW of unknown date, which was stratified above the fill. The wall included post-Bronze Age pottery with large fragments of plain and relief pithoi, the latter dating to the 7th century BC, as well as some LM II and Neopalatial pottery (including a Marine Style body fragment from a closed shaped vessel), and a fragment of obsidian (possibly from Yiali).

Two surface finds in 2015 are also of significance: a sealstone was found in the area where Trench 6 was subsequently placed, while a body fragment of a stone rhyton in relief was found before excavation started at the edge of the wooded area adjacent to trenches 1, 6, and 7. The fragment depicts part of an architectural construction of dressed masonry, crowned with a horizontal ledge, and perhaps depicts an ‘altar’ reached by a ramp to the right.
Author
John BENNET
Bibliographic reference(s)
Unpublished field report, British School at Athens.
Date of creation
2016-08-29 00:00:00
Last modification
2018-08-22 09:24:48
Picture(s) 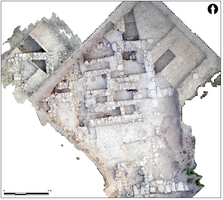 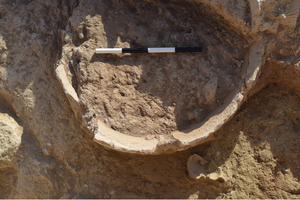 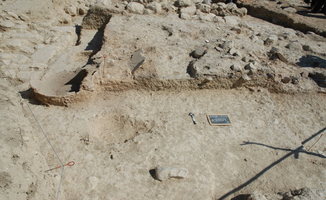 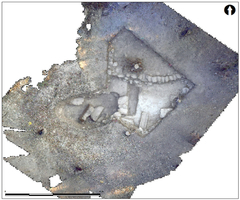