Key-words
Residence - Domestic space - Road system/waterway
Type of Operation
Survey
Institution
British School at Athens
Toponym
Knossos, Knosos, Cnossus, Cnossos
Linked Record
20052015201620172018
Report
Knossos Roman Geophysics. Daniel Stewart (Leicester/BSA) and Jennifer Baird (Birkbeck/BSA) report on the first season of geophysical survey focused on Roman Knossos in order to generate a working knowledge of the urban layout to aid the understanding of extant remains, and facilitate the study of the extensive collection of Roman material culture from BSA excavations retained in the Stratigraphical Museum. The initial 2015 season, carried out in September, had three main aims: firstly, to test the efficacy of geophysical survey over a wide swathe of the urban core, given variable terrain and land use within the valley; secondly to provide some preliminary information regarding the Roman city’s topography; and, thirdly, to identify targets for more detailed (and slower-paced) geophysical research using resistivity and ground penetrating radar in subsequent seasons.

The following equipment was used: a Bartington 602 gradiometer, covering 30-m by 30-m grids in fifteen traverses, recording 3,600 data points per grid, resulting in a high resolution intensive survey of a significant portion of the research area (Fig. 1). Each contiguous field system was termed an ‘area’, and each area varied in size depending on field boundaries and/or modern land use. A Leica ICON 60 GPS base station with a GS08plus Rover was also used, providing centimetre accuracy, used primarily to record grid layouts for the geophysical survey so they could be processed in a GIS environment. Any significant structural feature that we encountered was also recorded. The long term plan, over the course of the four seasons, is eventually to record all the standing remains with similar accuracy. The association of surviving standing remains with subsurface geophysical results will help establish the potential date of archaeological features evident in the geophysical data. With this system 148 grids were covered, or slightly less than 10 ha. For interpretative purposes, areas were grouped to aid interpretation.

A first preliminary evaluation of the results suggests the following tentative conclusions. It is possible to say with some certainty that the historic city had at least two grids helping to define its layout, the north-south grid being clearly associated with surviving standing Roman remains (Figs 2-3). How these grids intersected, and whether they were in operation at the same time, will be a research aim of future seasons. It can also be confidently asserted that the slopes of the Acropolis hill (Monasteriako Kephali) were intensively utilised in antiquity (Fig. 4). We will also work to digitize and place the plans from historic excavations in a GIS environment alongside our results, in order to build as complete a topographic model of the city as we can. It is also clear that geophysics (and magnetometry in particular) constitute a valid and valuable investigative technique for Knossos. However, it is also clear that the value of the data lies in the aggregate; patterns within one single geophysics plot cannot confidently be tied to archaeological remains without corroboration in neighbouring plots. It is also clear that magnetometry will be a useful tool for prospection, especially in relation to identifying targets for more refined geophysical techniques that are slower and therefore afford less coverage. Geophysics alone, however, is not sufficient to untangle the complicated topographic picture of the city of Knossos; integrating detailed GPS survey of standing remains, and potentially some selective data from the KULP survey will be necessary to construct a picture of the Roman city that stands up to academic scrutiny.
Author
John BENNET
Bibliographic reference(s)
Unpublished field report, British School at Athens.
Date of creation
2016-08-29 00:00:00
Last modification
2021-02-21 08:35:06
Picture(s) 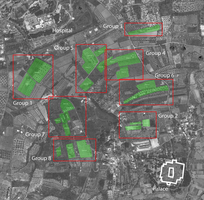 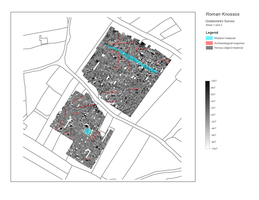 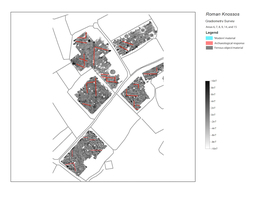 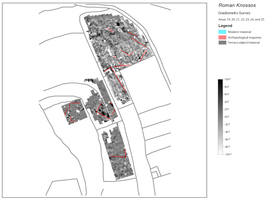