Key-words
Residence - Plant remains - Domestic space - Production/extraction site - Building Type - Material Type - Site Type
Type of Operation
Excavation - Research excavation
Institution
British School at Athens, Ephorate of Antiquities of Chalkidike
Toponym
Olynthos, Miriofiton
Linked Record
198719891992199419951997201420152016201720182019
Report
Olynthos. Bettina Tsigarida (Ephorate of Antiquities of Pella), Zosia Archibald (Liverpool/BSA), and Lisa Nevett (Michigan/BSA) report on the second season of this collaborative project which aims to build a holistic picture of Greek households within their urban and regional settings. The research design comprises two strands of investigation: excavation, using modern scientific techniques designed to reveal the organisation of domestic activity and aspects of the domestic economy, including subsistence practices, of two individual houses, one on each of the city’s two hills, while, at the same time, geophysical and field survey of the city and surrounding area will enable detailed reconstruction of its history, topography and extent.

Building on the first season’s fieldwork summarised in last year’s annual report, this season saw excavations reveal significant parts of the domestic quarters of a house termed (following Robinson’s nomenclature) B ix 6, consisting of part of the pastas (c), part of the ‘oikos unit’ including the bathing area (a) and ‘flue’ (b) and adjacent living rooms to the east (d and e) (Fig. 1). The more limited investigation of B ix 5 located a second ‘flue’ (cc), as well as two further rooms, one of which seems to have been a storage area (bb). Several important points emerge from these investigations, which increase our knowledge and understanding of the houses and households at Olynthos, and offer a basis for more detailed analysis and interpretation in future. There is clear evidence for alterations made to the living environment of the house during the period over which it was occupied. We have discovered clear evidence for distinguishing between activities taking place in the upper and lower storeys: house B ix 6 clearly had an upper storey, as demonstrated by an ashlar block found in the pastas, which must be the base for a wooden staircase leading to a gallery on the upper floor (Fig. 2). The ceramics lying on top of this block, along with joining fragments found at a lower level in the pastas itself, and other vessels found at the same level, must represent objects fallen from the upper storey. This provides exciting new evidence for beginning to study separately the uses of the upper and lower storey rooms in a Classical house. The investigation of parts of two ‘flues’ provides fresh insights into the role played by this type of space: the mix of artefacts found here, together with the ash, suggests that not only did this space contain debris from fires which may have been used for heating and/or cooking, but also that it was probably used for the refuse disposal, thus offering the opportunity to study rubbish disposal practices. At the same time the preservation of bone in these areas also provides a rich source of evidence about diet and subsistence practices. It is to be hoped that, when analysed, the archaeobotanical samples from here may yield complementary evidence of plant foods. The material located in the narrow space behind house B ix 6, Robinson’s stenopos, raises the possibility that as well as serving for drainage, this space may also have been used for other purposes by the residents of adjacent houses, perhaps rubbish disposal, agricultural activity, storage, or all three of these activities.

Fieldwalking yielded information about the landscape to the east of the North Hill of ancient Olynthos. One of the clearest results was the discovery of a high density of artefacts in fields near Agios Nikolaos, a church dating from the 12th century AD excavated by David Robinson (Fig. 3). Materials commonly found in the vicinity of this church included amphoras with combed decoration, green, brown, and white glazed pottery, and bricks and tiles with visible chaff inclusions. This material represents the clearest evidence for Byzantine occupation yet discovered by the Olynthos Field Survey. A second result of this year’s fieldwork was evidence for productive activities on the east slope of the North Hill. Slag, misfired potsherds, loom weights, a brick mould, and fired clay were all noted here. This evidence remains tentative until verified through further study. In contrast with the more northerly area surveyed last year, when a distinctive concentration of material was found at some distance from the city, the density of all artefacts observed was highest in the fields closest to the ancient site of Olynthos, including on the slopes of the North Hill outside the boundary fence. Density decreased as the slope diminished, suggesting that in this part of the city the boundary lay at the bottom of the slope, although due to the low visibility in some of these fields, further investigation is required to confirm this interpretation.

In addition to fieldwork, ceramic analysis was carried out in 2015. These contained few Attic or Corinthian vessels, while local finewares included some hybrid shapes (Fig. 4). Few, if any, sherds dated later than the mid-4th century BC. Future reports will provide information from analyses of archaeobotanical and zooarchaeological materials, as well as micromorphological and chemical analyses of excavated deposits.
Author
John BENNET
Bibliographic reference(s)
Unpublished field report, British School at Athens.
Date of creation
2016-08-29 00:00:00
Last modification
2018-08-22 09:24:48
Picture(s) 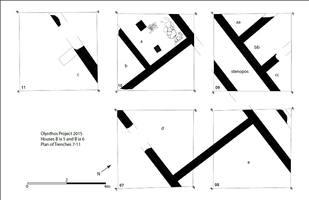 Fig. 1/ Olynthos 2015: Layout of trenches, together with the major features of houses B ix 6 and B ix 5 located within them. 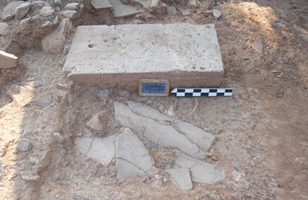 Fig. 2/ Olynthos 2015: Detail of House B ix 6, showing the stone stair base with tile collapse in front. 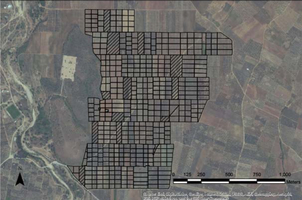 Fig. 3/ Olynthos 2015: Fields surveyed by the field survey team during the 2014 and 2015 seasons (hatched areas were unsurveyable during those seasons due to vegetation or other obstacles). 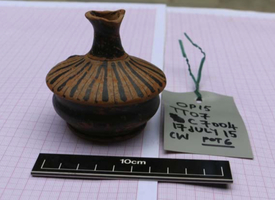