Key-words
Tomb - Inscription - Lamp - Numismatics - Tools/weapons - Metal - Bone - Stone - Glass - Cemetery
Type of Operation
Excavation - Rescue excavation
Institution
ΚΔ' ΕΠΚΑ
Toponym
Kato Elounda
Linked Record
198919921994199619992001200720082008 (1)2010
Report
Schisma Elounda, plot of E. Kounalaki-Loukaki. V. Zographaki (ΚΔ' ΕΠΚΑ) reports on continued excavations (Fig. 1). Twelve more tombs were found of three types: built, most likely vaulted, cist and tile-covered "hut tombs". Some tombs were cut into covering soil, others into bedrock. It was more clear that the intrusive tombs (especially the built and cist tombs) took no account of the existing burials, destroying totally or partially tombs in the same area. It is not yet clear, whether these intrusions took place in the Roman or already in the Hellenistic period. In the topsoil in the plot were found: many tiles and potsherds, a marble funerary stele, inscribed with 16 lines, another inscribed stone, part of a lamp, glass vessel fragments and iron nails. Part of a plaster floor was preserved in one of the tombs.

The 3 built tombs (Fig. 2) were perhaps vaulted, but their walls were not preserved to sufficient height to document the vault. 7 tombs were of the tile-covered "hut tomb" type. Tomb 14 included a bronze coin, part of a bone pin and a glass perfume bottle. Tomb 18 contained skeletal remains in poor condition, a glass perfume bottle, pieces of a glass vessel and a bronze coin. Other tombs were heavily disturbed and yielded only a few bones and sherds, an obsidian blade (Tomb 21) and a piece of amphora (Tomb 22).

Three graves were of the cist type. Grave 20 was heavily disturbed but contained a lamp, a bronze plate, bronze tweezers, bronze clothing decorations, and pieces of a glass vessel. Tomb 15 contained a bronze coin and fragment of a glass vessel. Only tomb 16, among those excavated, was undisturbed and contained 2-3 bodies, while the offerings were placed in distinct locations within the tomb. These included bronze coins, 2 glass perfume bottles, vessel fragments, a clay fruit-stand, a lamp with a depiction of a deer, another lamp with animal decoration and a bronze ring. 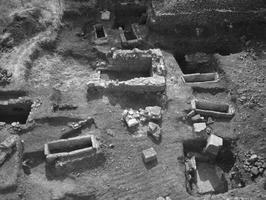