In the S, room 5β of a long building in the settlement (Fig. 2) was excavated and its successive levels investigated. The floor, hardened from use, belonged to the Neopalatial period, while the underlying level produced ceramics of the MM II-III period. Among the ceramics in this level was found a leg fragment from a human figurine, according to the excavator a boxer (Fig. 3). The next level produced MM IB-II ceramics.

In the so-called “Sanctuary”, above and N of the settlement, a narrow, corridor-like space SE of room 1 (Fig. 4) was investigated: its floor had blue plaster, its walls red. Because room 1 had the same colour scheme and its floor was at approximately the same level, the excavator suggests the 2 rooms were originally a single room, the narrow space functioning as a storage space.

In the cemetery investigation of the section of Tholos tomb B unexcavated by Xanthoudidis: groups of human bones (Fig. 5) were found from secondary burials, a few broken vessels of the EM IIA period and a Pre- or Protopalatial seal. Outside Tholos tomb B, where a part of its circular wall was missing, were found a seal, 5 beads from a necklace and many obsidian blades. In the tomb’s entrance a Prepalatial one-handled cup was found. In the annexe to Tomb A a Cycladicising marble idol of Koumasa style was found (Fig. 6, 7), while 3 vessels of EM IIA were found outside it.
Author
John BENNET
Bibliographic reference(s)
Ergon (2014) 45-50
Date of creation
2016-07-06 00:00:00
Last modification
2018-08-22 09:24:48
Picture(s) 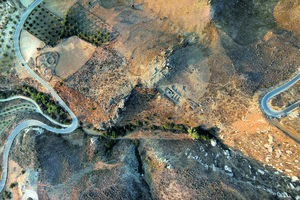 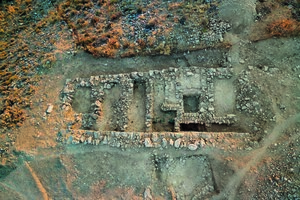 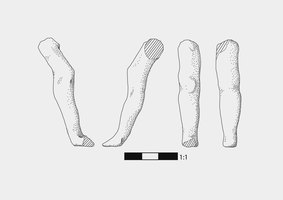 Fig. 5/ Koumasa, skeletal remains from the lowest burial level of Tholos tomb B.

Fig. 6/ Koumasa, Cycladicising idol of Koumasa type from the antechamber to Tholos tomb A (front).

Fig. 7/ Koumasa, Cycladicising idol of Koumasa type from the antechamber to Tholos tomb A (rear).