In the paved corridor 21 were found floor slabs from the upper floor as well as plaster fragments with polychrome decoration; similar fragments were found between rooms 8 and 9. The long (25 m) paved corridor 10 (Fig. 3) was found during excavation to be full of wooden beams and schist slabs from the upper floor. A steatite seal with an image of a bird-headed, winged female figure (Fig. 4) and a bronze double axe were recovered here.

Investigation of room 41 was completed and the following were found there: ceramics of the floral style, a portable hearth with incised decoration (Fig. 5), an alabastron, loomweights, stone tools and a fragment of triton shell. Finds from the adjacent room 42, paved with a column base, included conical cups and juglets, part of a kernos and an elaborate stone lamp.

Space 35 was revealed for the first time and preserved a staircase leading to the first floor. The space was notable for its careful construction and the finds, which included a lentoid bowl for heating water (pyriatirion).

Rooms 26 and 53 seem to have formed a unit, with 2 columns in the middle and a stone bench. In the E wall was a crypt which held a bronze tool, a pyxis lid and a bronze vessel for sprinkling liquid (according to Evans).

Room 11 was rich in small-finds, notably concentrations of jugs on piles of charcoal in 3 corners of the room. 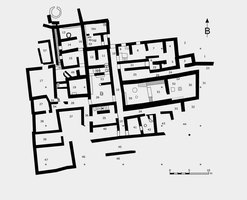 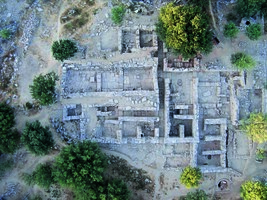 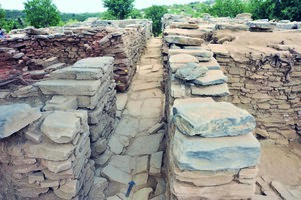 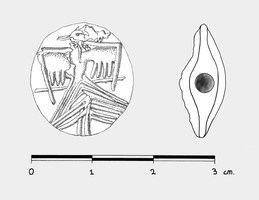 Fig. 4/ Zominthos, drawing of steatite seal with decoration of a female with wings in place of hands and a bird's head. 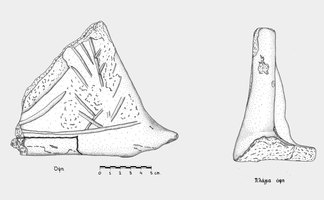 Fig. 5/ Zominthos, drawing of a fragment of a ceramic hearth with incised decoration.