Athens, ancient Agora. John Camp (ASCSA) reports on continued excavation in three areas: in Byzan­tine levels over the Painted Stoa, at the north end and beneath the Classical Commer­cial Building, and in Section OO in the old excavations.

Section Beta Theta overlies the Painted Stoa. The Byzantine settlement, which is largely dated to the 11th century AD was excavated further: walls, floors, several built pithoi, and other storage facilities were found (Figs 1, 2, 3). More pieces of the superstructure of the Painted Stoa were found built into these later walls, along with a variety of other material, such as gravestones and architectural elements.

Just above the floor of one pithos (West, no. 3) are two courses of well-worked squared limestone blocks (Fig 4). By measurement it is clear that they are the foundations still in situ for the third interior Ionic column from the west of the Painted Stoa (Fig 5).

North of the building, we finished clearing the collapsed Mycenaean cham­ber tomb uncovered last season, with material dating to the 14th century BC. To the west, we cleared the stomion (doorway) which was blocked in the usual fashion with a rubble wall (Figs 6, 7). Further west, just outside the doorway, in the area where a steeply sloping dromos (entrance) was cut through bedrock, we also found a round shaft which seems to have been a well of the early archaic period (J 1: 12), largely cut through bedrock, with a diameter of ca. 1.25 m. Water was encountered within the first meter or so below the dromos floor. The upper fill consisted of a fair amount of clay along with considerable fragmentary pottery of the late 8th and 7th centuries BC, including numerous Phaleron cups. Lower down, at a depth of over 2.50 meters, we recovered several fragments of cups which seem to date to the end of the 7th century BC.

To the south we encountered deep deposits of Classical fill. Cut into them was a round unlined shaft ca. 0.75 m. in diameter, with broken rooftiles and pottery of the late 5th - early 4th century BC (J 1: 14). At a depth of about 1.50 meters it produced large amounts of marble chips. To the west of J 1: 14, we followed deep fill down as a large and ill-defined pit (J 1:15). The water and depth suggest a well of some sort. Most of the fill was late ar­chaic in date with some very high-quality though fragmentary red-figured material, along with ostraka of the 480’s including Xanthippos, the father of Perikles, who was ostracised in 484/3 BC. A few pottery fragments of the third quarter of the 5th centu­ry suggest the material was deposited as much as 50 years later, perhaps as part of a belated post-Persian cleanup.

Within the Classical Commercial Building, we explored the lower floor levels of the northern rooms. In Room 4 we came across yet another ‘pyre’ (J 2: 30), a collection of pots buried with some signs of burning and a few bones, buried underneath the clay floor of the room (Figs. 4, 8, 9, 10). Numerous similar deposits have been found in workshops or private houses around the Agora. The Classical Commercial Build­ing has produced a great number already: thirteen within the building and 5 in its vicinity. So this is the 14th pyre to be found in the building itself, the largest concen­tration anywhere in the Agora. The assemblage looks much like other pyres, with small-scale cooking pots (chytra and lopadion), saucers and dishes, a lamp, and drinking cups. Altogether more than a dozen pots were found, along with relatively heavy deposits of charcoal and carbon, suggesting that this pyre was burned in situ. The pots suggest that the deposit should be dated to the first half of the 4th centu­ry BC, not far from 375 BC. Particularly noteworthy is a red-figured stemless cup with looping handles, the decoration close to the Group of Vienna 116. Poorly-painted, heavily draped figures adorn both the tondo and the outside, and ivy tendrils with berries in added white decorate the inside of the lip. Red-figured vas­es do not usually make up part of the assemblage of pyres and the use of a stemless cup is also unparalleled in these contexts.

In the next room to the north (Room 5), we encountered Geometric fill below the floor levels of the Classical Commercial Building. Beneath this early fill was a sub­stantial oval pit, measuring ca. 1.80 m. by 1.06 m., originally covered with two large, flat slabs, the eastern one of which had fallen into the pit (Figs 4, 11, 12). Pot­tery recovered (including two squat aryballoi, one intact) indicates that it is a Myce­naean tomb (J 1: 13). Along with the two vases, five beads were recovered. Pit graves of this sort are common in the agora, making up about a third of all Late Bronze Age tombs. They are generally smaller than chamber tombs, have no dromos leading into them, and usually contain a single burial. Though the lower part of the chamber was under the present water table, the individual burial in this tomb seems to have been placed in a largely extended position with its head at the west. A preliminary examination of the bones by Maria Liston suggests that the individual buried was a male, about 12 to 15 years old. The pottery indicates a date at the transition from LH II to LH III, that is, not far from 1400 BC.

In the old excavations to the southwest, Laura Gawlinski cleared an area just north of the building sometimes identified as the State Prison, across an ancient street running east-west. When first excavated, this area produced a number of Geometric burials and traces of archaic and 4th century BC houses which do not show up on most of the site plans (Fig 13). Traces of pebble mosaic floors, embedded basins, and a stone water channel flowing west towards the Great Drain suggest that this area, like much of that to the south, may have been filled with various small industrial establishments, some of them in private houses.

A pit at the extreme south, near the road, produced a collection of numerous black-glazed vessels of the 4th century BC (Fig. 14). The most common shapes were rolled-rim plates with rouletting and stamped palmettes, ‘echinos’ bowls, also stamped, with the characteristic inturned rims, and fish-plates with a central depression and outturned rim. The sides of the pit are somewhat amorphous, and yet we did not reach the bottom, so its original form and function are not yet clear. 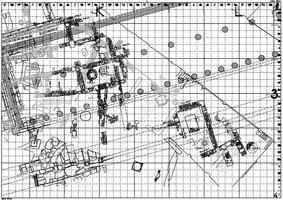 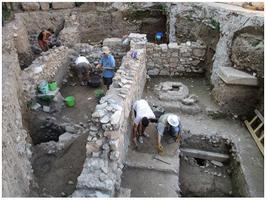 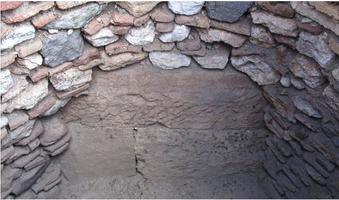 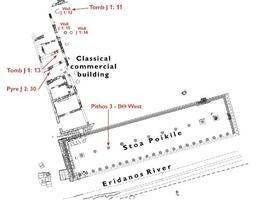 Fig. 6/ Athens, Ancient Agora, general view of Mycenaean Tomb J1:11. Collapsed portion of tomb in foreground, rubble wall doorway in centre, just behind is the top of Well J1:12 dated to the early archaic period, in background the steeply sloping dromos (entrance) to the tomb. 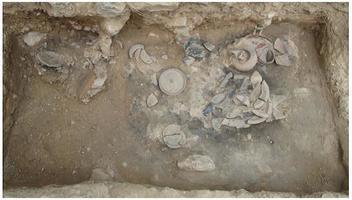 Fig. 8/ Athens, Ancient Agora, in room 4 of the Classical Commercial Building 'pyre' J2:30 was discovered, the 14th pyre to be found in the building itself, the largest concentration anywhere in the Agora.

Fig. 9/ Athens, Ancient Agora, Pyre J2:30 conserved and then photographed, the assemblage looks much like other pyres, with small-scale cooking pots (chytra and lopadion), saucers and dishes, a lamp, and drinking vessels. 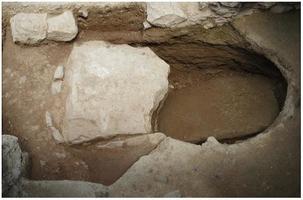 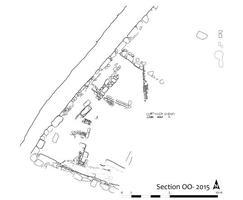 Fig. 14/ Athens, Ancient Agora, a collection of a half-dozen or so black-glazed rolled-rim plates of the 4th c. BC discovered at the extreme south near the road.