Cholargos, Cholargos Metro Station. M. Pologiorgi (Β’ ΕΠΚΑ) reports on the discoveries of workshops and burials. The area belonged to the ancient deme of Phlya. Another section of the road that was previously reported was excavated (Fig 1). The road ran from the city to the Mesogaia, was three metres wide and had a retaining wall on both sides. It is dated in the 5th c. and it also had a 4th c. B.C. construction phase. A 457-474 A.D. coin was found in the drain that ran alongside the road. This indicates that the road was in use in the Byzantine period. The drain was covered with tiles.

Remains of workshops were found on both sides of the road. One housed a Hellenistic/Early Roman kiln and another kiln and numerous roof-tiles.

More burials from the 5th c. B.C. cemetery alongside the road were excavated. These include 2 cist graves, 2 poros sarcophagi, 2 terracotta larnakes, which were both covered with another two larnakes (children burials), and 1 pyre (Figs 2, 3, 4). The cist graves were made so as to imitate sarcophagi, since slabs were also placed on their floors (Fig 2). This type of grave is known from other Classical cemeteries, but is nevertheless relatively rare.

The burial offerings include lekythoi, cups, a black-blazed krateriskos and a squat lekythos (Figs 5). Additional finds from the area include an alabastron, a hydria, an oinochoe and more lekythoi (Fig 6). 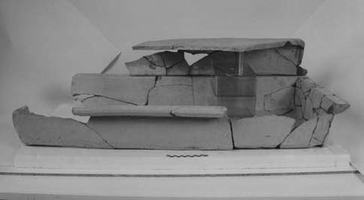 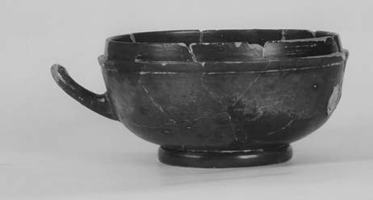