Acharnai, Aghios Petros, Ag. Petrou and 146 Heroon Polytechneiou Streets (O.T. 673, property of TEMKA – A. Papathanasiou) M. Platonos and G. Panousopoulos (Β’ ΕΠΚΑ) report on the discovery of a Roman building (Fig 1). The excavation was conducted by Th. Georgousopoulou. In total 7 walls were found which delimit three spaces (Fig 2). The first is a cistern, while the other two are rooms. All walls are constructed with rubble stones and mortar, and two of them attest to a second construction phase (Fig 3). The cistern was lined with hydraulic concrete (Fig 4). It contained roof-tiles, Roman sherds and bones. Its floor was lined with hydraulic concrete as well, while tiles were found below it. A settling basin was found in the middle of the room (Fig 5). The second space is identified as a room. Part of its floor was lined with hydraulic concrete. Roman plain ware and a Byzantine sherd were found in it. A silo was also found in this room (Fig 6). It contained plain ware sherds, and numerous shells and snails. The third space contained few Roman sherds. Finally, a rock-cut silo was found NE of the building. It contained plain ware sherds and few bones. 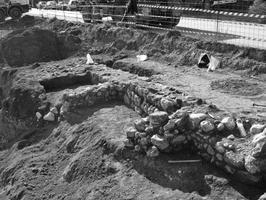 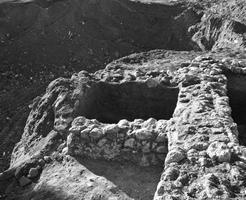 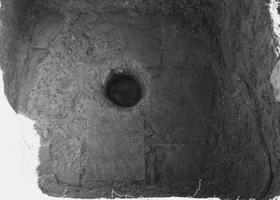 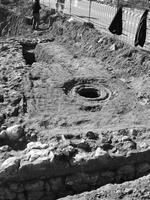