Glyka Nera, Phouresi, 11 Aiolou Street, (property of Eu. Panagopoulou). E. Brettou (Β’ ΕΠΚΑ) reports on the excavation of a Mycenaean Chamber tomb. It was oriented E-W, with the entrance to the E. The dromos was 2.4 metres long and had one step. Only few sherds from drinking vessels were found on it. The entrance to the tomb had been sealed with a dry-stone wall. Rock-cut pillars stood on either side of the entrance. The latter measures 0.93 m. in height and 0.57 m. in width. No bones were found in the small ellipsoidal chamber. It nevertheless appears that the body had been placed in the centre of the chamber. Only few, small votive offerings were found: a miniature amphora, a stirrup jar, a Psi figurine and a miniature skyphos (Fig 1). The tomb dates in the 13th B.C. 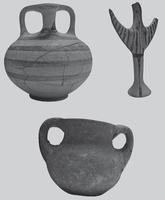