Burial 1: poros sarcophagus containing a squat lekythos with a palmette.

Burial 2: terracotta larnax containing fragments from a bronze pin and a white-ground lekythos.

Burial 4: pyre. Sherds from a black-glazed lekythos were found in the ashes.

Workshop: A 1st c. B.C.-1st c. A.D. tile workshop was found. It contained three kilns. In Late Roman times it continued to operate as a workshop. Nevertheless, it is unclear what was produced. From this latter period, two conical, stone basins were found along with two rock cut pits for the accommodation of more basins. A pi-shaped pipe was also excavated. The floor was built with stone and terracotta slabs as well as spolia. These include two marble funerary stelai dating in the 1st-2nd centuries A.D. (Asimakopoulou-Lintzeri 2003-2009). Finally, a large drain was found. 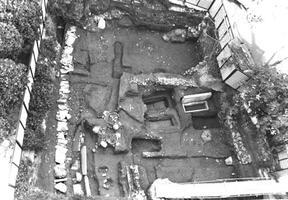