Athens, 2 Monastiraki Square and 88 Mitropoleos Streets (O.T. 60001, property of S. Mpairaktari). E. Servetopoulou (Γ’ ΕΠΚΑ) reports on the discovery of buildings dating from the Hellenistic period until the 19th c. (Figs 1,2,3). A road was found dating from the 3rd B.C. – 6th A.D. Numerous building remains were excavated on both sides of the road. Some of these are identified as houses and others as workshops. They date from the 1st B.C./1st A.D. to Early Byzantine times (4th-6th A.D.). An extensive drainage system ran under the buildings and ended in the Eridanos river. Specifically, a Roman workshop was excavated containing a shallow pit with lumps of iron. A cistern lined with hydraulic concrete and a pi-shaped pipe were found N of the workshop and date in the same period. A second building consisting of three rooms was found west of the street. This building attests to two periods of use. In Roman times one of its rooms housed four hearths. In Late Roman and Early Byzantine times it was reconstructed and only one hearth remained in operation. It fell out of use in the 5th-6th c. A.D.

The Byzantine remains from this area date from the 9th c. onwards and include 5 silos and a circular deposit pit. A rectangular building with a stoa dating in Post Byzantine times was also excavated. The stoa had a wooden roof. The building remained in use until the 19th c. A bronze obol dating in 1878 was found in it. Finally, two wells were excavated dating in Ottoman times. 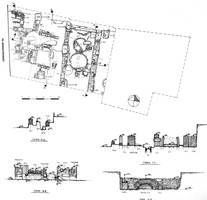 Fig. 1/ Athens, 2 Monastiraki Square and 88 Mitropoleos Streets, plan and sections of the site. 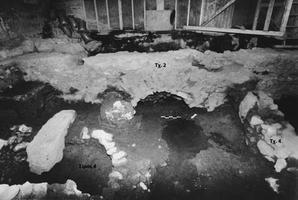