Geometric period: During that time this area was a cemetery. A pit grave was excavated containing a pyxis and a skyphos. In addition, few rock-cut pits were found, which could have been graves.

Classical period: A developed water system for the channeling of water from the Ilissos was in use. A wall constructed with large boulders, and a complex of rock-cut basins and drains appear to have served that purpose. In addition, a well was found which contained sherds from amphorae, pithoi, lekanides, mortaria, skyphoi, roof tiles and mud bricks. The remains of classical houses were also found. They had mud brick walls and floors of beaten earth. Finds from the houses include sherds from amphorae, jugs, salt cellars, mortaria, terracotta lamps and numerous spindle whorls. The houses were abandoned in the first half of the 4th c. B.C.

Roman to Late Roman periods: The area was once again used for burials. Two 1st B.C. – 1st A.D. pit graves were excavated. A large building was constructed in late 2nd – early 3rd c. A.D. The building consists of 16 rooms arranged around four large and two small courtyards. Its orientation is similar to that of the temple of Zeus and the Roman building identified as the gymnasium of Hadrian (2nd c. A.D.). The roof was built with Corinthian and Laconian roof tiles. Two cisterns were found under the building. The first was piriform in shape and the second rectangular. They were connected via a shaft. The piriform cistern was later converted into a well, which was in use until the 6th c. A.D. The rectangular one was partly filled with green clay and a two-step staircase was added to it. A choregic inscription for the Thargelia of 372/1 B.C. (Makri and Sakka, 2010-2013) was found in the piriform cistern. The purpose of the building remains unclear. It could have been a complex of shops or a guesthouse. In the 6th c. A.D. it was converted into a workshop complex. Circular pits, some of which filled with lime plaster, large quantities of pottery, slags, pieces of glass and marble fragments attest to this latter use. 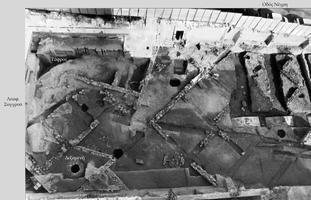