Athens, Museion Hill. O. Vogiatzoglou (Α’ ΕΠΚΑ) reports on the excavation of the building known as ‘The cave of the deaf’. The building lies on the NW slope of the Museion Hill and is adjacent to the Eptathronon. A road known as the South Road runs 30 m. to its north (Vogiatzoglou, 2009: 221-235). The building is a two-room cave house, cut in the north outcrop of the rock (Figs 1,2,3).

Room I: It occupies the west part of the outcrop. Its walls were covered with thick plaster as were the interiors of the four rock-cut burial pits it contains (Figs 2,3). Two crania were excavated from one of the pits; one belonging to a female and the second to a young individual. Despite the fact that the burials had been looted in antiquity they still contained traces of gold, glass unguentaria (1st-2nd A.D. and 3rd-4th A.D.), figurine fragments, sherds from plain ware, a 3rd c. A.D. coin, fragments of burned glass, a 3rd c. A.D. lamp, nails and the remains of a pyre (Fig 4). The fragments of burned glass which had been nailed together in antiquity indicate that a ceremony related to magic was performed there in the 3rd-4th c. A.D.

Room II: It occupies the east part of the outcrop. Its walls and floor were plastered and it contained two rock-cut burial pits. The pits had a N-S orientation and are dated in the 1st-2nd c. A.D.

A rectangular space outside the two rooms appears to have served as an andron. A rubble wall and a rock-cut cist grave were excavated from it west part. 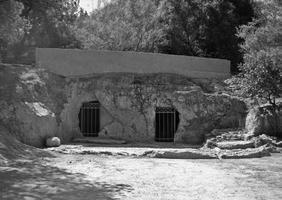 Fig. 1/ Athens, Museion Hill, the cave of the deaf. 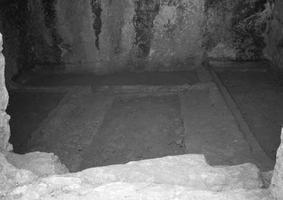 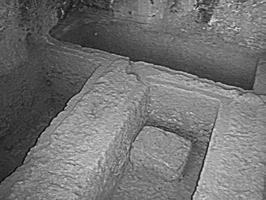 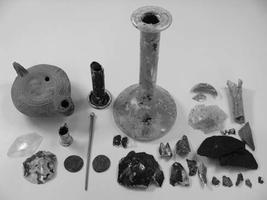