Plaka, Adrianou 96 (Benizelon Mansion) Nikos Tsoniotis (Α’ ΕΠΚΑ) reports on the excavation of another section of the Late Roman wall (Figs 1,2). As with other revealed sections, stone blocks were used for the construction of the outer faces and rubble for the fill of the wall. The remains of two Byzantine buildings, dating in the 11th-12th and 13th-14th centuries respectively, were identified. The first had been constructed adjacent to the wall, whilst the second had been built on top of the wall.

A cist grave and a burial pit were also excavated. The cist grave is adjacent to the walls’ euthynteria and contained 5th-6th c. and 12th-13th c. A.D. pottery sherds. The grave appears to have been set along the ancient road connecting the Roman Agora with Hadrian’s Library. The burial pit contained bones and crania of a minimum of 11 adult individuals. The bones were covered by a layer containing Middle Byzantine (12th-13th c.) pottery sherds.

Additional finds include architectural parts and 40 fragments of statues and inscriptions. 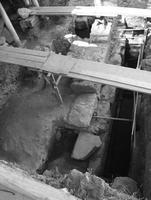 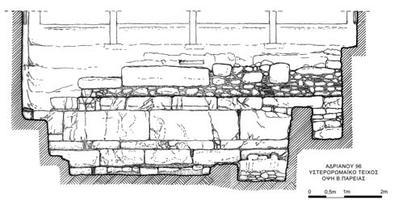