Athens, Areos Street. D. Sourlas (Α’ ΕΠΚΑ) reports on the excavation of the NW corner of the courtyard of the Hadrian’s Library (Fig. 1,2). Opus caementicium had been used in order to create a flat courtyard on top of the northwards sloping bedrock. The courtyard was paved with pentelic marble slabs, which had been placed on a thick layer of hydraulic concrete. It extended in front of the whole of the north wing of the Library. Finally, the space underneath the courtyard consisted of three oblong, vaulted rooms forming a cryptoporticus. The use of this space remains unknown. The ancient road, running N-S, passed west of the cryptoporticus. It connected the Library with the Acropolis and the Roman Agora. Finds from the area include few fragments from architectural members and a fragment from a relief depicting a clothed, female figure. 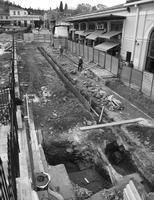