Key-words
Bath - Pipe/drain - Cistern - Tomb - Hearth/Kiln/Oven - Sculpture - Domestic space - Road system/waterway - Building Type - Find Type - Site Type
Type of Operation
Excavation - Rescue excavation
Institution
Α’ ΕΠΚΑ
Toponym
Athènes, Athens
Linked Record
2007
Report
Athens, Makrygianni plot (New Acropolis Museum). Stamatia Eleutheratou (Α’ ΕΠΚΑ) reports on further excavation in various parts of the site (Fig. 1).
1) Another bathtub was revealed in the area between the Weiler and the Museum building (Fig. 2). This bathtub belongs to the 6th-7th c. A.D. phase of the frigidarium of the Central Bath. The frigidarium contained in total six small bathtubs.
2) The south end of House A’ (second- to sixth-century A.D.) was revealed in the area south of the Museum building. This is the only house that needed to be removed for the construction of the museum. A new, Roman to early Christian building was excavated south of this house. Its only remains are sections of its walls. A well containing 5th c. A.D. pottery lies west of these walls. Both House A’ and the Roman house were set on the remains of an early Roman foundry (1st B.C. – early 2nd A.D.). Two new casting pits were identified (pits II and III) (Fig. 3). The foundry had been established over the remains of a 4th c. B.C. room. Two deposit pits, contemporary with this room, lie to its west. These contained numerous table ware and cook pots (Fig. 4). Two prehistoric, child burial containing no burial goods were found near the northwest corner of the aforementioned room (graves 69 and 70). In addition, numerous middle Helladic remains lie in the area: 2 wells, a floor, postholes and grooves.
3) The bottom of a Byzantine pithos and another two pits for pithoi were located SE of the Museum. The foundations of two walls and one pillar belonging to an Early Christian building were also found in this area. The most important discovery was a Roman (2nd – 3rd c. A.D.) complex of rooms with mosaic floors (Fig. 5). The rooms have a NE-SW orientation. A rectangular cistern was excavated south of the rooms. The cistern remains un-datable.
4) Another section of the ancient road and its drain was revealed (NMA-II). The marble torso of a youth had been reused in the construction of the drain (Fig 6). The torso dates to Roman times.
5) A 6th – 7th c. A.D. room containing kilns, tentatively interpreted as a workshop, was excavated on the west side of Makrygianni. A second room lies near it containing clay floors dated in the 3rd – 4th c. A.D. The room also preserves a door opening, which is dated in the 6th c. B.C.
Author
Chryssanthi PAPADOPOULOU
Bibliographic reference(s)
ADelt 62 (2007) Chr., 81-4
Date of creation
2015-11-13 00:00:00
Last modification
2018-08-22 09:24:47
Picture(s) 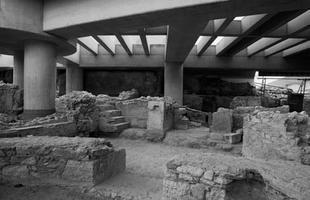 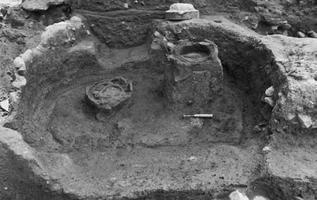 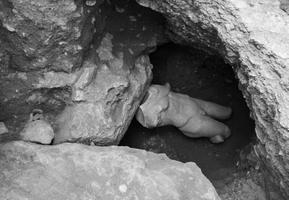