Key-words
Gymnasium - Stoa - Figurine - Hearth/Kiln/Oven - Numismatics - Tools/weapons - Metal - Sporting establishment - Domestic space - Production/extraction site - Sanctuary
Type of Operation
Excavation
Institution
Ministry of Culture, Education and Religious Affairs: Ζ' ΕΠΚΑ
Toponym
Archaia Olympia
Linked Record
19881989199019911992199319941995199719991999 (1)2000200220042004 (1)2007200820092010201120122013201420152020
Report
Olympia, Sanctuary of Zeus - gymnasium. The Ζ' ΕΠΚΑ reports on excavation (begun in 2012) which has completely exposed the gymnasium. The Hellenistic (second- to first-century BC) building, which was the same length as the Stadium (185.15m), was situated on the bank of the Kladeos, northwest of the Altis. A 186m-long continuation of the eastern perimeter wall of the gymnasium is also preserved (to a height of 1.1m), as is the continuation of the east stoa, with sections of column in situ and a drainage channel. The west stoa does not survive, and may have been washed away by the Kladeos. The Sacred Way too has not been fully located and may have been damaged in antiquity.
Remains of later activity include a well, two kilns, part of a terracotta paved floor and Roman-Late Roman walls outside the east stoa. These remains were all found in an area of ca 350m2 explored in connection with work to display the gymnasium and create a new entrance to the archaeological site. A further 60m2 yet to be investigated is expected to produce domestic and workshop remains of the third and fourth centuries AD.
Finds include, in addition to pottery and tools, 350 bronze coins and a Roman bronze statuette of a male deity. 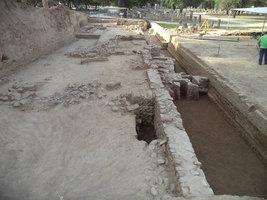 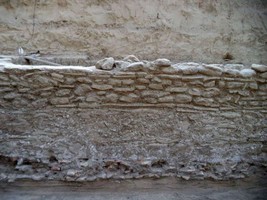