Key-words
Pipe/drain - Figurine - Numismatics - Road system/waterway - Find Type - Site Type
Type of Operation
Excavation - Rescue excavation
Institution
Η’ ΕΠΚΑ
Toponym
Kanoni
Linked Record
2006
Report
Kanoni (O.T. 631, property of Ch. Simoni EPE – Doukaki). G. Metallinou (Η’ ΕΠΚΑ) reports the discovery of two building complexes to the north and south of an east-west road. The rooms were oriented east-west, four to the north of the road and three to the south, where investigation continues. Two water channels formed of terracotta rooftiles were found in the north and northeast of the excavated area. Two (possibly three) rectangular structures (one and perhaps a second tile-lined and the other in isodomic masonry packed with mud and tile fragments, with seven steps down into it and an apse as a later addition) are probably storage facilities. The absence of waterproofing of the stone structure indicates that it was not a cistern. A stone-lined well was found in the northwest of the plot.
In the southern area, a well of built fieldstones and sherds of large vessels was found inside the angle of two walls.
The 1.5m-wide road was defined by walls on either side. Fill from the road included much chiefly Archaic pottery, but excavation has yet to be carried to depth. A poorly preserved tile grave within the road contained a supine inhumation with one very worn bronze coin.
The 58 bronze coins recovered include one with a head of Herakles on the obverse and a ship’s prow on the reverse (229-248 BC), one with a kantharos and a ship’s prow (300/299 BC), and one with a ship’s prow and grapes (300/299 BC). The Archaic pottery consisted largely of skyphoi with wavy line decoration, but black-glazed sherds (some with stamped decoration), skyphos bases with cross-hatching, transport amphora bases and handles, and terracotta figurines were also found among a large volume of finds which confirm the use of the site from the Archaic to the Hellenistic period.
Author
Catherine MORGAN
Bibliographic reference(s)
ADelt 61 (2006) Chr., 724-5
Date of creation
2015-07-28 00:00:00
Last modification
2018-08-22 09:24:46
Picture(s) 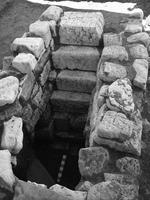