Key-words
Commercial area - Public area - Site Type
Type of Operation
Excavation
Institution
DIA, EEA
Toponym
Lechaion, Kolombotsi
Linked Record
2014
Report
Lechaion Harbour Project. D. Kourkoumellis (EMA) and B. Lovén (Copenhagen/DIA) report on the 2013-2014 season of a collaborative project to study and advance the presentation of the harbor of ancient Corinth at Lechaion.
The team exposed and recorded some 2,750m2 of submerged harbor works which extended along 911m of coastline. Remains of the entrance channel were located on the east side of the harbor. The breakwaters flanking the entrance were mapped for a length of 43.2m, with a maximum preserved width of 11.7m. The maximum width of the channel, 8.9m, is a probable indication of the maximum width of the ships that could enter the harbor. Further to the west of the channel, the remains of two moles (the western and middle moles) were mapped. The middle mole is 35.3m long, with a maximum visible width of 16.1m, and is preserved to a height of three courses, while the western mole was mapped for a length of 66.5m and has a maximum visible width of 14.7m. Blocks in both moles bear traces of rectangular and T-shaped cuttings for the wooden clamps which secured the successive courses.
At the entrance to the channel were the remains of the wooden foundations of eight compartments (Caissons 1-8) filled with small and medium-sized stones and hydraulic cement. The dimensions of the two best preserved were 9.7 x 4.7m and 10.9 x 5.9m. A further four of similar size found to the west of the channel may have been the foundations of a further mole.
Geophysical survey using a 3-D parametric sub-bottom profiler was conducted in order to acquire a detailed picture of the stratigraphy in the study area and thus the development of the coastal palaeogeography, as well as details of ancient constructions (e.g. harbor installations) and other buried items.
Author
Catherine MORGAN
Bibliographic reference(s)
Ministry of Culture, Education and Sport, Press Release 30.10.2014
Date of creation
2015-06-29 00:00:00
Last modification
2018-08-22 09:24:46
Picture(s) 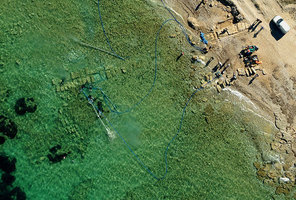 Fig. 1/ Lechaion Harbour Project, Plan of the submerged remains in the entrance channel. 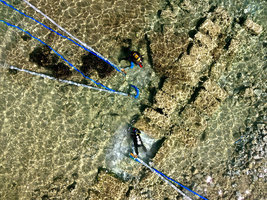 Fig. 2/ Lechaion Harbour Project, Excavation on the southeast side of the channel. 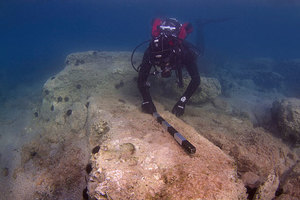