Key-words
Cemetery - Metal - Site Type - Material Type
Type of Operation
Excavation - Rescue excavation
Institution
Β’ ΕΠΚΑ
Toponym
Acharnes, Acharnae, Menidi
Linked Record
2006
Report
Acharnai, 9 Lepeniotou Street (property of E. Rouka). Maria Platonos (Β’ ΕΠΚΑ) reports the discovery of graves and pyres at the south side of the plot.
Grave 1: a cist built of thin slabs of greyish stone, oriented northeast-southwest.
Grave 2: a tile grave (of black washed cover tiles used for both walls and floor), oriented northeast-southwest, to the east of Grave 1 and Pyre 1. Offerings (a squat lekythos with wavy decoration, a black-glazed squat lekythos, a black-glaze conical bead, and a seashell) date the grave to the end of the fifth or the beginning of the fourth century BC. Further sherds were collected from the fill of the grave.
Pyre 1: a severely damaged pyre oriented northeast-southwest to the east of grave 1.
Pyre 2: another pyre, oriented northeast-southwest, produced a few burned sherds and bones.
Pyre 3: north of grave 2, part of a third pyre, oriented north-south, produced only a few burned sherds.
Pyre 4: a forth pyre between grave 2 and pyre 2, oriented northeast-southwest, produced just a few sherds and fragments from an iron object (possibly a strigil).
Two mid fifth-century white-ground lekythoi were excavated in the area of the pyres.
Three small terracotta larnakes at the south edge of the plot were broken by the bulldozer on the first day of construction work. Four vessels of the second half of the fifth century BC were found in the area of these larnakes (three white-ground lekythoi, and a black-figure squat lekythos).
Surface finds from the plot include two lidded lekanides with lids (one one-handled and one two-handled), a black-glaze miniature kotyle, and a black-glazed olpe, of the second half of the fifth century BC.
Author
Chryssanthi PAPADOPOULOU
Bibliographic reference(s)
ADelt 61 (2006) Chr., 144-145
Date of creation
2015-06-25 00:00:00
Last modification
2018-08-22 09:24:45
Picture(s) 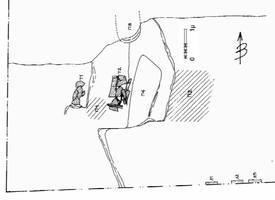