Key-words
Fortifications - Public area - Building Type - Site Type
Type of Operation
Excavation - Rescue excavation
Institution
Α’ ΕΠΚΑ
Toponym
Athènes, Athens
Linked Record
2006
Report
Library of Hadrian. Nikos Tsoniotis (Α’ ΕΠΚΑ) reports on further excavation of the Late Roman wall. The part of the wall between Areos Street and the south section of the Library ranges from 3.4 to 4.2m in thickness, probably due to a projection on the inner face which may have been intended to strengthen the section of the wall adjacent to the gate on its east. Both the projection and the inner face of the wall contain reused stone. The upper surface of two blocks, 1.68m long, was revealed. The southwest corner of the projection had been damaged and repaired with bricks. Fifteenth- and sixteenth-century glazed sherds were excavated from the layer covering the blocks. The fill of the wall (soil and reddish mortar) contained fragments of brick and marble spolia.
In front of the Late Roman gate at the western edge of the south enclosure of the Library, excavation revealed a 0.23m high marble threshold placed over a 0.49 m high block belonging to the southern enclosure (a third block below this was excavated to a depth of 0.14m). According to the excavator, the gate was either contemporary with the Late Roman wall, since its threshold is at the same level as the west peristyle, or dates to the fifth century AD. At a later (undetermined) period, the level of the threshold was raised with the addition of an Ionian cornice fragment.
Author
Chryssanthi PAPADOPOULOU
Bibliographic reference(s)
ADelt 61 (2006) Chr. 61-64
Date of creation
2015-06-25 00:00:00
Last modification
2018-08-22 09:24:45
Picture(s) Fig. 2/ Library of Hadrian. The inner face of the Late Roman wall. Fig. 3/ Library of Hadrian. The southwest corner of the projection. 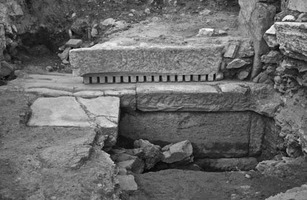