Key-words
Residence - Tomb - Hearth/Kiln/Oven - Plant remains - Bone - Domestic space - Building Type - Find Type - Material Type - Site Type
Type of Operation
Excavation - Research excavation
Institution
Aristotelian University, Thessaloniki
Toponym
Giannitsa
Linked Record
2005200620072007 (1)20082008 (1)20092009 (1)20102010 (1)
Report
Archontiko, Toumba. A Papanthimou (Aristotelian University, Thessaloniki) presented the following report to a 2-day conference on archaeological research conducted by Gr universities organized by the Ministry of Culture (06− 07/12/2007). While it partly duplicates earlier AR reports, it presents a convenient summary of research at the site.
Two principal phases of PH settlement have been identified. The more recent, phase A, is dated by C14 to ca. 1516−1414 BC: characteristic pottery has incised geometric motifs picked out in white paste. The older phase B spans the end of the EBA and the start of the MBA. This phase includes 3 settlement horizons (II, III, IV) and can be placed by a series of C14 determinations at ca. 2140−1780 BC, i.e., with continuous settlement for ca. 260 years.
Horizon II represents the most recent settlement in phase B, and is characterized by posthole constructions which have been badly damaged by later disturbance and water erosion. Nonetheless, it proved possible to recognize the ground plans of 3 buildings and a paved court. Even though these buildings have not been completely investigated, they seem to share the same NW−SE orientation, and to be broadly similar in size. They are a maximum of 6m l. and 3−3.5m w. Two of these buildings share a common wall. Mud-brick constructions, plain pottery and various portable finds were also located.
Immediately below horizon II lay the remains of an older settlement, horizon III, which was destroyed by fire. Information about the organization of this settlement is more confused, since much of the available architectural information consists of fragments of floor and postholes with no clear idea of arrangement. Only one residential unit has been identified to date, which follows its predecessor and successor in terms of form and orientation. Inside are 2 mud-brick structures set directly on the floor level, which slopes down markedly from E to W.
The next horizon, IV, again has well-preserved posthole constructions: the entire area is covered by a thick (0.3-0.35m) destruction deposit with signs of a fierce fire. This deposit contained much construction material and sealed the floor levels, preserving a large quantity of finds (Fig. 1). To date, 7 dwellings have been investigated (ca. 8 x 4m): that investigated to the fullest extent measures 8.8 x 3.5m. In general, these are range houses which are often united by a party wall and share a common NW−SE orientation − something which continues into later building phases.
Among the most interesting architectural discoveries in horizon IV are the clay structures erected in groups within houses and forming part of their internal organization. Some 60 such constructions have been found in horizon IV, of which 83% are preserved in good condition. These served to create hearths (Fig. 2), ovens, storage space, low platforms, etc. The variety of types and their distribution reinforce the likelihood of a special function in each case and suggest that they were used to organize space for different tasks connected with food preparation, cooking and storage. Analysis of the temperatures to which these clay structures were exposed, undertaken by NCSR Democritos (Y. Maniatis), will aid understanding of their function. Results obtained to date indicate that these temperatures did not exceed 650°C.
Almost every house contained a shallow pit grave, normally located in the NE part, under the floor and close to clay-built features. The state of preservation of the skeletal material allows only an estimate of age, not of sex. In one case, the burial was that of an infant of 12−18 months and in another, that of a newborn of less than 6−9 months. In some tombs the bones were placed within a vessel, while in others the skeleton was laid out in prone position or on its side: there were no grave goods.
Among the pottery, a category of fine, polished, black or dark brown vessels can be distinguished. A typical form is the amphoriskos with very high handles. Also common are onehandled rounded cups, small jugs, large vessels with marked necks and lids, and pithoi with corded decoration. Investigation to date indicates that the majority of vessels are of medium or large size (basins, amphorae, pithoi, etc.).
Evidence for diet and subsistence activities is provided by animal bone, carbonized seeds and molluscs. Meat was largely obtained from ovicaprids, pigs and bovines, while deer hunting also played a significant role. Shellfish and fish were also consumed. Archaeobotanical research (T. Valamoti) demonstrated the variety of grains and pulses used in the preparation of foodstuffs such as gruels and breads. A large quantity of acorns was found, as well as seasonal fruits such as blackberries, figs, grapes and dogwood fruit. Lallemantia oil (a variety imported from the Caucasus) and flax oil was also used.
G. Deliopoulos presents an account of the pottery from the building with the stone foundation (phase A).
Author
Catherine MORGAN
Bibliographic reference(s)
Unpublished conference paper (A. Papanthimou); G. Deliopoulos, AEMTh 20 (2006), 685−702
Papanthimou, Aik., Pilali, A., Papadopoulou, E., Archontiko Yannitson : A Settlement in Macedonia during the Late Third and Early Second Millenium B.C. (poster, Mesohelladika, BCH Suppl. 52 (2010), p. 975-980.
Papadopoulou, E., Papanthimiou, A., Maniatis, I., Ζητήματα οργάνωσης του χώρου στο τέλος της πρώιμης εποχής του Χαλκού: τα νέα δεδομένα από το Αρχοντικό Γιαννιτσών, ΑΕΜΘ 21 (2007) [2011], p. 77-82.
Date of creation
2009-12-01 00:00:00
Last modification
2018-08-22 09:24:29
Picture(s) 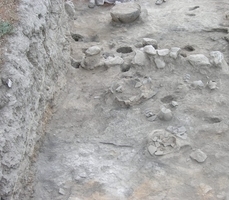