Key-words
Temple - Residence - Lamp - Numismatics - Architectural revetments - Wood - Metal - Glass - Religious building - Commercial area - Domestic space - Sanctuary - Building Type - Find Type - Material Type - Site Type
Type of Operation
Excavation - Research excavation
Institution
Canadian Institute in Greece; Ministry of Culture (ΙΕ' ΕΠΚΑ)
Toponym
Kallithea FARSALON, Kislarion, Kislar
Linked Record
2004200620072010201220132019
Report
Kallithea (anc. Peuma). S. Karapanou (ΙΕ' ΕΠΚΑ), M. Haagsma (Canadian Institute in Greece/Alberta) and S. Gouglas report on continuing excavation on the Kastro. Systematic excavation was begun in building 10, a possible domestic structure, and completed in building 5, a small temple near the agora (Fig. 1).
Building 10 measures 19.45 x 14.60m. Excavation began in the W part (Fig. 2) in units A, B, C, D and E. The discovery of additional wall foundations caused revision of preliminary interpretations of the internal configuration of rooms and areas. The so-called pastas (unit E) is split into 2 − a room and a possible open area. The W area of the building (units A, B and C) can be divided into 3 or 4 different rooms. The exact location of the main entrance of the house is now clearer. It is not near unit A, directly opening to the street, as originally thought and as is usual in Gr houses, but probably on the E side of the house, thus opening from the courtyard to an alley. This may be a local phenomenon, as there are similar entrances in Hel houses in nearby Pharsala.
Much of the superstructure of the house was built from irregular stone blocks. Very large worked limestone blocks, some 2m l., are set on top of smaller irregular foundations. In some areas this upper foundation layer includes spolia. In various rooms the walls were plastered in black, yellow, light blue, white and red. The 2006 test trench in room 2 yielded a lot of plaster, much of which was in situ. In unit A, near the first floor level, plaster mouldings were also found and it is clear that plaster ‘pilasters’ framed the doorways. In area 3, 2 Doric marble capitals were found lying on the first floor level. It is as yet unclear whether these belonged to a peristyle lining the courtyard of the building or whether they were used as original construction material in the walls. In close proximity to them was a large marble block with 3 breast-like protrusions, similar to that found in the entrance of building 5 in 2005. Stones like these occur locally, for example in the courtyard of houses at Pharsala and at Phthiotic Eretria, where they seemed to have functioned as votives in a sanctuary of Apollo. Their significance is unknown.
The test trench in room 2 yielded 2 distinct floor levels. The first, at ca 0.4m below the surface, contained roof tiles, architectural fragments and few finds; the floor itself was made of beaten earth. Ca. 0.5m below this level, a 2nd floor consisted of small limestone fragments. The fill above the first floor level yielded many worn tile fragments and very little diagnostic material. A few pieces of combed ware indicate moderate EByz use. On this level were found 2, probably Byz, coins. No floor level could be associated with these finds.
The first floor level yielded many finds, some of which were datable. Many sherds of moulded ware were found in a variety of qualities. Some compare well to high-quality moulded bowls produced in Pherae during the 2nd−1st Ct BC: various fragments depicted mythological scenes and had names (Polydeukes) in relief. A large fragment of a glass bowl from unit B suggests a post-2nd Ct date for this floor level. The lowest floor level was only reached in the test pit (2 x 1m) in room 2. The finds were very well datable: a coin of the Thessalian League (M2nd Ct) and a distinct deposit of ashes, an unguentarium, a lamp, a small bowl, bones and astragaloi lying on top of a large roof tile. The lamp is an EHel type (3rd Ct), while the unguentarium dates to the 1st half of the 2nd Ct. Apparently this habitation stage ended half way through the 2nd Ct BC.
Building 5: excavation of this small temple, begun in 2005, was completed (Fig. 3). The E room (anteroom) has internal dimensions of 4.63m (N−S) x 0.96m (E−W). At least the S part was paved with big slabs (as was at least part of the courtyard in front of its entrance). Excavation in this room reached the natural red soil with gravel which follows the natural N−S inclination. This room produced a bronze coin and 3 iron nails (possibly from the door).
The W room of the shrine has internal dimensions of 3.30m (E−W) x 4.62m (N−S) and was entered via a doorway 1.25m w. of which the threshold was in situ. The threshold’s top surface had 2 levels and there are sockets for the doorposts and pivots. In the central and W part of the room were 15 iron nails, a few fragments of clay figurine (possibly a female figurine − Aphrodite to judge from a nude upper leg with part of a himation) and a clay thymiaterion Perhaps the figurine(s) and the thymiaterion were placed on a wooden shelf on the W wall or on a table. A few fragments of charcoal in this area may come from such an item. There was also evidence of burning in the soil in this part of the room. In the main room were 7 bronze coins, a small shallow dish with black paint, a few sherds of other vases (a lamp included) as well as many roof tile fragments. Both rooms were covered by stone debris from the walls.
Author
Catherine MORGAN
Bibliographic reference(s)
Unpublished field report, Canadian Institute in Greece (M. Haagsma)
Date of creation
2009-12-01 00:00:00
Last modification
2018-08-22 09:24:29
Picture(s) 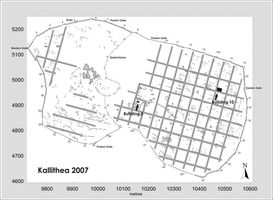 Fig. 1/ Fig.1. Kallithea: city plan of the kastro with the location of the excavations in 2007. 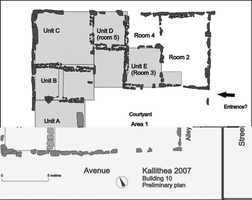 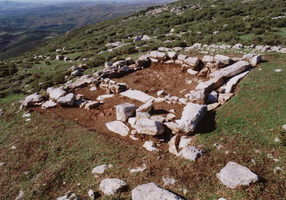