Key-words
Domestic space - Site Type
Type of Operation
Excavation - Research excavation
Institution
ΛΖ’ ΕΠΚΑ
Toponym
Derveni, Aktaion
Linked Record
2008200920102010 (1)2010 (2)
Report
Derveni. D. Sarri (ΛΖ’ ΕΠΚΑ) reports the discovery of an Early Helladic settlement in the course of construction of supporting bank for the Kiato-Patras stretch of the new Corinth-Patras railway (fig. 1). The sites lie barely 120m to the east of a Late Roman settlement revealed in the same works (2497), in the area of the Spyrouleiko ravine by the motorway junction. An area 43 x 4m was excavated.
Walls defined small rooms (none of which has yet been completely exposed). Built of unworked stones of varying sizes, with two faces and a fill of smaller stones, they were generally preserved to a height of four courses (0.7m), although excavation is not yet complete. The largest room is ca. 4.8 x 2.3-2.5m (the south side is unexcavated), with a doorway on the west side preserving a stone hinge block for a probably wooden door: the room contained sherds of large pithoi. Ca. 0.8m to the north, most of a large pithos decorated with two impressed ‘rope’ bands was found in situ (similar decoration was also found on other sherds). Preliminary examination of the pottery suggests that it was not wheel-made. Vessel shapes represented are bowls, plates and typical Early Helladic bird-shaped ‘saltcellars’ (which have close parallels for form and fabric in ancient Corinth). Many sherds have red, light brown or grey-black slip: different fabrics are represented, from a reddish fabric with many inclusions, to the very fine fabric used for thin-walled vessels. Other finds include a round pyxis and three conical spindle whorls. A notable quantity of Melian obsidian was recovered, mostly blades (over 50, plus two flint blades). The use of bronze and lead is also attested.
Further walls, differently oriented, beneath these, confirm earlier settlement yet to be investigated.
Author
Catherine MORGAN
Bibliographic reference(s)
D. Sarri, in K. Kissas and W-D. Niemeier (eds), The Corinthia and the Northeast Peloponnese (Munich 2013), 465-468.
Date of creation
2014-08-05 00:00:00
Last modification
2018-08-22 09:24:44
Picture(s) 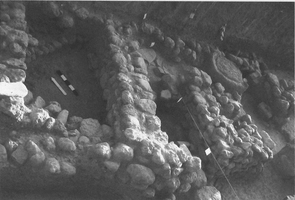 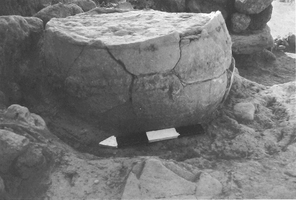 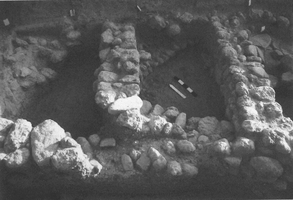