Key-words
Altar - Temple - Numismatics - Sanctuary - Find Type - Site Type
Type of Operation
Excavation - Research excavation
Institution
National Archaeological Museum, Aristotle University, Thessaloniki
Toponym
Velvina, Vilvina
Linked Record
201420162017
Report
Elliniko, Velvina (anc. Molykreio). N. Kaltsas (formerly National Archaeological Museum) and A. Moustaka (Aristotle University, Thessaloniki) review the results of continuing excavation (since 2006) in a sanctuary in the centre of the ancient city first excavated by Anastasios Orlandos in 1922-5. Orlandos discovered a temple oriented north-south (14.37 x 31.45m) which he dated ca 400 BC, but believed to have been unfinished.
Renewed excavation revealed a second, smaller (10.25 x 5m) temple (temple A) on a terrace in the south of the sanctuary. This was on the conventional east-west orientation. A coin hoard found at the base of the cult statue of this second temple, which contained Athenian, Aetolian and Phokian issues, one coin of Opountian Lokris, and three silver posthumous tetradrachms of Alexander the Great, dates the foundation of the temple to the early third century BC. East of the temple lay the altar (14m long in its final phase). In the large area between the temples, and slightly to the east, a rectangular building (14.35 x 9.2m) of local standstone (built in almost the same style as the temple) contained six rooms including a reception area, storerooms, a workshop, benches and a bath. Beside this building was a ca 186m-long stadium with 32m of stone seating. Surrounding the main temple is a rectangular structure (16 x 11m) perhaps a form of closed stoa.
Author
Catherine MORGAN
Bibliographic reference(s)
Eleuthertypia, Ethnos 26/04/2-14 (with corrections by A. Moustaka)
Date of creation
2014-07-30 00:00:00
Last modification
2018-10-04 08:56:30
Picture(s) 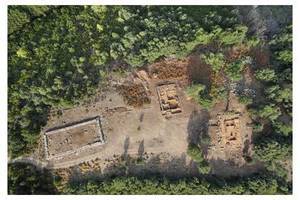 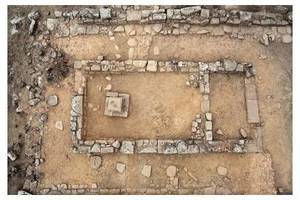 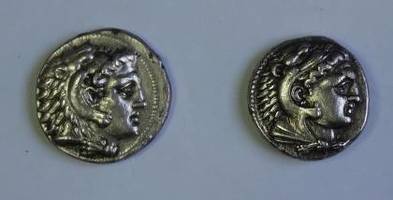