Key-words
Tomb - Cemetery - Building Type - Site Type
Type of Operation
Excavation - Rescue excavation
Institution
ΚΣτ’ ΕΠΚΑ
Toponym
Aidonia, Botsika (JO206/1927)
Linked Record
2009
Report
Agia Eirene, Phlius (property of M. Naki). K. Kaza-Papageorgiou (ΚΣτ’ ΕΠΚΑ) publishes a rescue excavation conducted in 1979-1980 in a settlement on the hill of Agia Eirene (on the left of the road from Nemea to Aidonia, just before the turn to Leontio, 2.5km southwest of ancient Phlius). The site had been severely disturbed by deep ploughing.
Late Roman building remains (probably of an extensive farmstead) were located from a depth of 0.5m, in placed founded directly onto prehistoric structures (stones from which were re-used). Two Late Roman tombs nearby contained respectively two and three contemporary burials. Fill over the Roman remains contained large quantities of Mycenaean, some Middle Helladic and a very few glazed Middle Byzantine sherds, as well as Late Roman.
Beneath the Roman remains were partially preserved house walls and floors, dating from the end of the Middle Helladic period to the end of Late Helladic IIIB. Pure Middle Helladic deposits (over stereo) were identified in five trenches in the lower part of the hill. Small cist tombs were found scattered within and between houses in this area: they contained contracted inhumations with a few vases of the late 17th-early 16th century BC. Middle Helladic sherds and whole vessels are mostly matt-painted, with some unpainted (including burnished wares) and a very few polychrome. Forms include amphorae, prochoes, kantharoi, amphoriskoi, goblets, ring-handled cups and kylikes. Imports of cooking and matt-painted wares are noted from Aegina, with some Cretan import also. The Middle Helladic settlement was destroyed by fire: among burnt deposits, a quantity of carbonised bird’s vetch (vicia cracca) was contained in a matt-painted amphora found in situ.
Early Mycenaean pottery was found in all parts of the excavation, including goblets in Middle Helladic tradition with glossy paint, Vapheio cups, closed shapes with marine style and early stipple decoration, LHII ephyraean goblets, and LHIIIA1 monochrome kylikes and cups plus open and closed shapes with stipple decoration. Notably more LHIIIA2-IIIB pottery was found, especially in fills by walls in the east of the excavation area (perhaps a storage area). This includes shallow cups with running spiral decoration and kylikes (including monochrome examples). LHIIIB1 and 2 are both represented, the former distinguished by e.g. Zygouries kylikes and the latter by e.g. type B and dotted rim deep bowls. LHIIIC Early can also be distinguished among deep bowls in particular (which include monochrome examples). The site was abandoned early in the 12th century.
In general, the Mycenaean pottery is of higher quality than products of neighbouring Argive workshops. Four Pictorial Style vessels are reported, including two skyphoid kraters discussed in detail. One depicts a procession right to left) with a helmetted warrior between two horses (holding a shield in his right hand and the reins of the horse behind him in his left). The single sherd of the second depicts a similar scene, but here the warrior wears greaves and holds a spear or staff. Both are dated on the transition from the 13th to the 12th century.
Author
Catherine MORGAN
Bibliographic reference(s)
K. Kaza-Papageorgiou, in K. Kissas and W.-D. Niemeier (eds), The Corinthia and the Northeast Peloponnese (Munich 2013), 387-395.
Date of creation
2014-07-29 00:00:00
Last modification
2018-08-22 09:24:44
Picture(s) Fig. 1/ Agia Eirene, Phlius, view of the hill from the east. 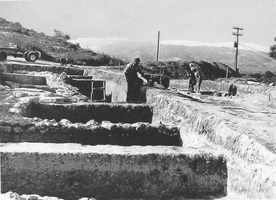 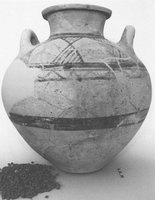 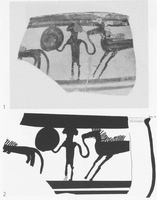