Key-words
Altar - Church - Figurine - Hearth/Kiln/Oven - Religious building - Cemetery - Production/extraction site - Sanctuary - Road system/waterway - Find Type - Building Type - Site Type
Type of Operation
Study
Institution
ΛΖ’ ΕΠΚΑ
Toponym
Korinthos, Corinth
Linked Record
20052009
Report
Anc. Kromna. V. Tassinos (ΛΖ’ ΕΠΚΑ) reports the results of new prospection at key sites in the area of anc. Kromna (between Kyras Vrisi, Hexamilia and Xylokeriza).
Rachi Boska: in addition to known Neolithic and Bronze Age occupation (when large quantities of Melian obsidian and high quality pottery of both periods, e.g. Bronze Age Cycladic and Aeginetan imports, attest to wide connections), Protogeometric and Early Geometric pottery confirms that activity continued through the tenth and ninth centuries, contemporary with the cist grave cemetery discovered (below Classical graves) at Perdikaria just to the north (see ID2496, 3799). The only grave offering found here was a pair of bronze spirals. It is likely that the focus of settlement through this period was the north slope of Rachi Boska, which had at least one good water source and commanded routes from Kenchreai to ancient Corinth and the surrounding plains. From the Middle Geometric period onward, the focus moves north to Kesimia, where a cemetery of stone sarcophagi has been found – this should be considered alongside the neighbouring Perdikaria cemetery. Fine ninth- and eighth-century pottery (similar to that e.g. from Ancient Corinth) has been revealed in illegal excavation in the cemetery: a rectangular hearth/altar of the same period, found on a rocky height close to the cemetery, probably belongs to an early sanctuary. The new settlement focus is closer to the major Hexamilia quarry complex, then exploited at least for sarcophagi, and to the sanctuary of Poseidon at Isthmia. Evidence for eighth- and early seventh-century activity in the area remains minimal, but from the mid seventh century onwards activity reached a peak. Notable quantities of offerings (pottery and figurines) are reported at shrines on the peak of Boska and in the vicinity of the Geometric cemeteries at Perdikaria and Kesimia. Significant remains of houses, tombs, wells, shrines, irrigation and production facilities have been found in an area defined to the north by the road from Isthmia to ancient Corinth, to the south by the Rachi Boska, to the east by the hill of Agios Dimitrios, and to the west by the long quarry trench. However, graves of the period 650-400 BC were found beyond this area in all directions, chiefly along road lines, and the late Archaic-early Classical cemetery excavated at Perdikaria in 2004-2005 should also be noted (see ID 2496, 3799). Major routes in the Corinthian road network cut through Kesimia, linking the Hexamilia quarries (to which Kromna likely owed its prosperity) to major centres and ports. From the end of the fifth century onwards remains are notably fewer (materials from earlier buildings were re-used in the Hellenistic trans-Isthmian wall), but dedication on Rachi Boska continued through the fourth and third centuries BC and the quarries continued in use.
A revival took place from the first century AD onwards, with individual funerary monuments and pottery noted on and around the Rachi Boska, and at Kesimia and Perdikaria. The main Roman settlement in the area was probably further west, at Monastiraki, just to the south of modern Hexamilia. An Early Byzantine (fifth- to seventh-century AD) settlement of indeterminate size is reported on the Rachi Boska, while the discovery during deep ploughing at Perdikaria of pottery, two marble columns and pieces of Early Christian marble screen indicates the presence of a small church. From the first century AD onwards, the new stone-paved road from Kenchreai to ancient Corinth passed south of the Rachi Boska, by-passing Kromna: some sections are visible at Hatoupi near Hexamilia, and others at Sophesi were destroyed by ploughing.
Author
Catherine MORGAN
Bibliographic reference(s)
V. Tassinos, in K. Kissas and W.-D. Niemeier (eds), The Corinthia and the Northeast Peloponnese (Munich 2013), 251-261.
Date of creation
2014-07-29 00:00:00
Last modification
2018-08-22 09:24:44
Picture(s) 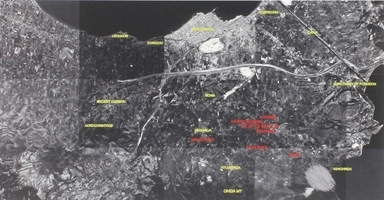 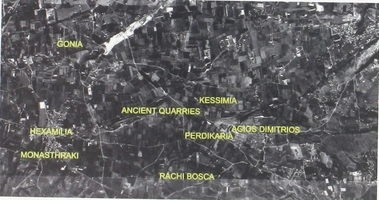 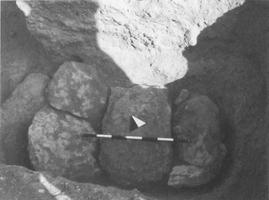 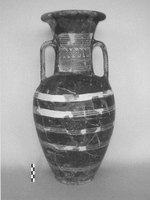 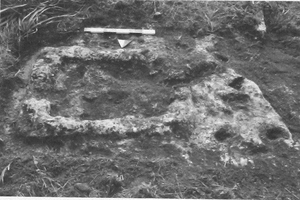 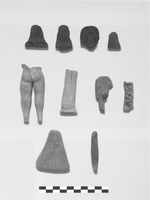 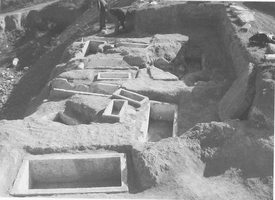 Fig. 8/ Anc. Kromna, Perdikaria, view of the cemetery from the west. 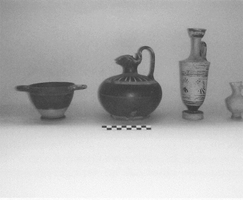 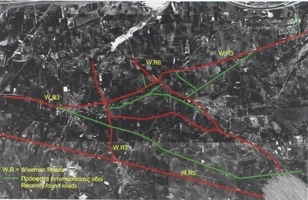