Key-words
Bone - Material Type
Type of Operation
Study
Institution
BSA
Toponym
Karystos
Linked Record
2013
Report
Plakari. M. Groot (Amsterdam) reports on study of faunal remains from two seasons of excavation (Fig.). Evidence of Early Iron Age cult activity at the site comes from a bothros containing votive offerings, pottery types linked to consumption of food and drink, and large quantities of animal bone.The assemblage consists of a mixture of heavily fragmented burned and unburned bones - the burned bones being the remains of burned sacrifice, while the unburned bones are the refuse of sacrificial meals. The over-representation of femur and tailbone fragments in the burned bone assemblage fits expectations of sacrifice based on later literary and iconographic sources and other zooarchaeological research: these elements are absent from the unburned assemblage. While the over- and under-representation of other elements can be explained by bone density and taphonomic processes, the lack of phalanges suggests that hides were taken elsewhere for processing. The presence of a few bones from foetal or neonate animals may indicate the sacrifice of pregnant females. Adult sheep and goats were preferred for sacrifice at Plakari, but this may reflect local availability rather than religious beliefs.
Author
Catherine MORGAN
Bibliographic reference(s)
Unpublished research report, British School at Athens, Fitch Laboratory (M. Groote).
Date of creation
2014-07-28 00:00:00
Last modification
2018-08-22 09:24:44
Picture(s) 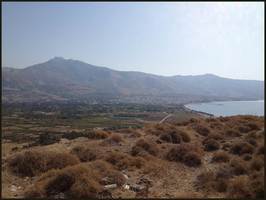 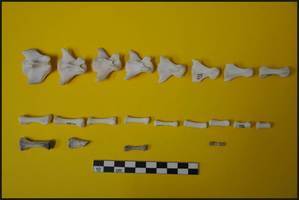 Fig. 2/ Plakari, burnt caudal vertebrae below a complete tail from a modern sheep.