Key-words
Bone - Cave
Type of Operation
Excavation - Research excavation
Institution
ΕΠΣΝΕ
Toponym
Limenion
Linked Record
19951997199920002005
Report
Kalamakia Cave. A. Darlas (ΕΠΣΝΕ) reports on the12th season of excavation during which investigation of Stratigraphical Unit IV was completed and that of Stratigraphical Unit VI continued.
Stratigraphical Unit IV contained the largest number of strata and was relatively undisturbed (17 successive occupation floors have so far been excavated to a depth of 2m). The upper 0.1m excavated, which contained dense archaeological remains, represents the lower part of a 0.25m-thick level first investigated in 2003 and 2004. It contained a large quantity of bone both from mammals and tortoises, worked stone, and evidence of intense burning. A hard ash deposit (1m2) in the centre of the excavated area indicates the presence of a fireplace set directly onto the floor with no further construction. Ash, carbonized material and burnt bone was scattered across the excavated area. At the base of the stratum lay large stones and pieces of stalagmite: the density of the deposit suggests human action. The level as a whole is too dense, and its contents too varied to distinguish individual occupation floors within it. But it represents a main settlement location, in contrast with most of the later floors which represent brief periods of activity of distinctive character, to judge by the dominance of particular kinds of material (e.g. bones from a particular part of the skeleton or the dominance of one type of stone in the lithic assemblage).
Below this level, a layer of red clay 0.1-0.15m thick, containing very little archaeological material, represents a deposit of med when the cave was very damp and largely unoccupied. A few bones (largely ribs and long bones) of a (probably bovine) mammal, and a thin layer of ash in the northeast corner of the trench reflect one brief period of activity.
Preliminary examination of the large quantity of bone indicates the presence of: Ursus arctos, Panthera pardus, Lynx cf. lynx, Vulpes vulpes, Felis silvestris, Bos and/or Bison, Capra sp., Cervus elephus, Dama dama, Sus scrofa, Leporidae (probably Lepus), and Testudo sp. Most material came from the upper 0.1m excavated (i.e. from the base of the main level). Deer and chamois bones dominate among mammals (as in all the overlying occupation floors in the cave). Tortoise remains are less common than those of mammals, but include large pieces of shell. Many bones were burnt at high temperatures. Very few bones had cut marks from stone tools, but a number had been bitten and chewed. One tooth (the canine of a boar) bore traces of retouch on the long sides similar to that on stone tools.
The stone tools (which were generally very small) were similar in character to those from overlying layers (Mousterian with much evidence of Levallois technique). There was a high proportion of tools in relation to unworked items. All stages of production are represented, using locally available stone. One piece of limestone had been used as a percussion tool, noting also a number of limestone flakes from the manufacture of similar tools.
One further human tooth (an upper incisor from an adult on the basis of wear) was found to add to the five previously retrieved from this level (and from the cave as a whole, six teeth, and single fragments of a cranium, vertebra and radius). This is the largest collection of Neanderthal remains yet found in Greece.
Stratigraphical Unit VI. Following the removal of the upper 2m of archaeologically sterile deposits, excavation reached an occupation floor which proved to be the only archaeological layer in the unit. The upper part of the layer, which contained dense archaeological material, was removed, leaving the floor to be excavated separately. Finds include a number of well-preserved coprolites, stones and a few bones of large mammals (deer are noted). Stones were absent from the upper layers and in general coincide with evidence of human activity. The coprolites were large in size and come from omnivores (probably bears): further analysis (e.g. for phytoliths and mineral content) will follow. They were probably preserved because after a brief period of human habitation, the cave was abandoned and then used as a refuge by flesh-eating animals (and bears). Thereafter it was abandoned altogether and flooded (perhaps because the entrance was blocked).
Author
Catherine MORGAN
Bibliographic reference(s)
ADelt 60 (2005) Chr. B2, 1210-13
Date of creation
2014-07-21 00:00:00
Last modification
2021-03-09 12:48:37
Picture(s) 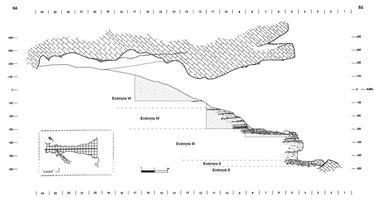 Fig. 1/ Kalamakia Cave, section of the cave, strata and trenches. 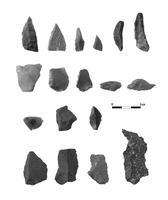 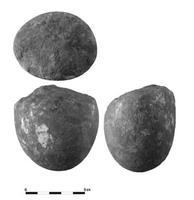