Key-words
Temple - Residence - Tomb - Figurine - Hearth/Kiln/Oven - Inscription - Stone - Religious building - Public area - Sanctuary - Building Type - Find Type - Material Type - Site Type
Type of Operation
Excavation - Research excavation
Institution
Swiss School of Archaeology in Greece: Ministry of Culture (IΑ' ΕΠΚΑ)
Toponym
Amarynthos, Kato Vathia (151/1914)
Linked Record
200520062007201220132014201520162017
Report
Amarynthos. S. Fachard, T. Theurillat (Swiss School) and A. Karapaschalidou (IΑ' ΕΠΚΑ) report on a 2nd season of test excavation at the foot of the Paleoekklisies hill (E of mod. Amarynthos) aimed at locating the Sanctuary of Artemis
Amarysia. Two plots were investigated in 2007, both S of the national road (Fig. 1).
In the S. Kokkalas plot, 3 large trenches were opened. Part of an E7th Ct BC wall (M15) was discovered in the N trench; this is carefully built with 2 facings and an internal filling (2m x 0.5m E−W), but is too fragmentary to interpret securely. Ca. 10m W lay an angle shaped by 2 walls (2.6m x 0.5m E−W; 1.5m x 0.5m N−S); the coarse treatment of the facings indicates that they are foundations. A pit containing pottery from the E7th Ct BC gives a taq for this construction, which was probably built at the end of the PGeo. Between these walls, a cist grave covered with schist slabs contained the remains of a child and 9 Sub-PGeo III vases. The grave appears to be isolated and not part of a cemetery. To the S, a deep sounding revealed 2 large blocks carefully levelled at an elevation of 0.95masl which date to the Myc period.
Apart from a Hel dump at the E of the plot, no finds later than the 7th Ct BC were discovered in the Kokkalas plot; the same was so in the S of the Patavalis plot, N of the national road (AKunst 50 [2007], 135−40). This sector was occupied in the EIA, but systematic excavation is required to clarify its function.
Further S, 2 small trenches were opened at the W edge of the M. Manis plot. Beneath mod. fill lay a 4th Ct BC monumental wall at a d. of 1.5m. The deeper soundings revealed a Geo wall (M21) and abundant 8th−7th Ct BC pottery.
The Geo wall (SW−NE), double faced and rubble packed, was excavated only to a l. of 2m, while its w. reaches 0.8m: it apparently supported a mud-brick elevation. Built in the 8th Ct BC, it was destroyed in the SubGeo. Its function cannot yet be determined, although its considerable width suggests an important construction.
The Cl foundations of M20 rest on the Geo wall and cut into a pit containing tiles, pottery, the lower part of a female terracotta protome and a terracotta statuette of a seated female figure (Fig. 2). The base of the wall (N−S) is composed of 2 courses of rectangular limestone blocks; it was traced for 6m before disappearing into the adjacent plots, mainly to the W where a large block with anathyrosis was discovered on the surface in 2006. The first course is formed of 4 stretchers (l. 1.27m; h. 0.5m), well fitted with a straight exterior face; the 2nd course (w. 1.3m) has 10 headers (l. 1.3m; w. 0.54m; h. 0.4m) whose surface is finely levelled at 2masl. Two blocks are held together by a round-headed dovetail cramp, while a mortise for an iron clamp indicates a euthyntheria. The blocks of the 2nd course are imperfectly aligned and do not form a rectilinear facing: they probably belong to the foundations and were not intended to be visible. The 2 courses belong to different building phases, although their dates remain imprecise. The stretchers were laid in the 2nd half of the 4th Ct BC; this first wall, whose elevation was probably mud-brick, was destroyed during the 3rd Ct BC. In the 2nd Ct BC, several layers covering the first wall were cut by a foundation trench for the 2nd course of blocks.
The wall was covered by a layer of over 100 fragments of marble architectural blocks from its elevation. Among them was a fragmentary inscription, ]ΥΝΘ[. The discovery of a lime kiln in trench 1, a few metres S, suggests that the marble elevation was dismantled and smashed for the kiln. The kiln was later abandoned and filled with stone, and the entire sector covered by 1.5m of mod. fill (as in the Kokkalas plot). The function of this building is still uncertain. The use of limestone blocks for foundations is too widespread in the 4th Ct BC to indicate any particular type of construction. Although monumental, the building’s dimensions are not yet known, and the associated material is too fragmentary or non-specific to determine function. Although there are good reasons to believe that the monumental wall belongs to the Artemision of Amarynthos, interpretation will be left open until the next campaign.
Author
Catherine MORGAN
Bibliographic reference(s)
Unpublished field report, Swiss School of Archaeology in Greece
Date of creation
2009-12-01 00:00:00
Last modification
2018-08-22 09:24:29
Picture(s) 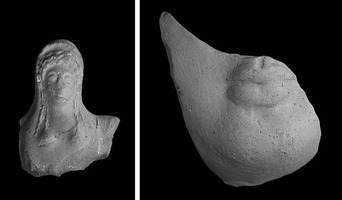