Key-words
Altar - Figurine - Inscription - Lamp - Sanctuary - Find Type - Site Type
Type of Operation
Excavation - Rescue excavation
Institution
Γ’ ΕΠΚΑ
Toponym
Alepochori, Kato Alepochorion
Linked Record
2005
Report
Dourako, Alepochori (property of N. Manoli). P. Valta (Γ’ ΕΠΚΑ) reports the discovery of a shrine on a property beside the road from Alepochori to Schoinos, 800m west of the Archaic shrine at Bouri. Initial prospection in 2004 revealed two perpendicular walls of fieldstones (walls 1 and 2), a little pottery (mainly plain lamps and squat lekythoi), figurines, and a sherd inscribed ΑΝΕΘΕΚΕ. Continued excavation in 2005 revealed two further, smaller walls (5 and 6), over which was a deposit of figurines and burned miniature plainware oinochoae and lamps. Bordering this to the south was an altar consisting of a rectangular area (3x1m, 0.5m deep) defined by four sandstone slabs (probably re-used) which contained burnt soil, a large quantity of miniature vessels (plainware oinochoae and lamps), figurines and river pebbles. A further sandstone slab was laid in the centre of the area beneath the soil layer. Finds from the altar date from the late sixth to the early fifth century BC.
To the west, a stone pile contained a fragment of an inscription on marble:
ΑΠΟΛΛ
ΑΠΟΤΡ
Further peribolos walls in the west of the plot defined a large rectangular area including the altar. Small rooms/defined areas on the west side remain to be fully investigated. These produced chiefly fifth-century pottery plus some earlier sherds.
South of the shrine were two further north-south parallel walls (11 and 13) of the same construction and at the same elevation, over 21m in length. Two further walls in the intervening area were found very close to the modern surface: one of these is over 35m long and may have been intended to divide the plot. These latter walls cannot be securely dated (pottery around them is of various periods to Early Christian), but they are assumed to be post-Classical.
Author
Catherine MORGAN
Bibliographic reference(s)
ADelt 60 (2005) Chr B1, 124-26
Date of creation
2014-07-21 00:00:00
Last modification
2018-08-22 09:24:44
Picture(s) 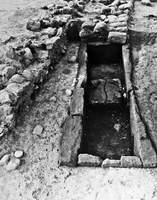 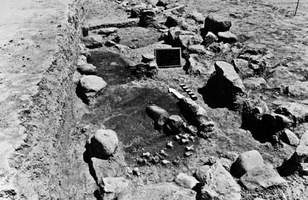 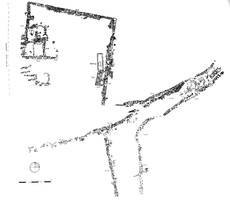