Key-words
Tomb - Figurine - Architectural revetments - Sculpture - Plant remains - Bone - Stone - Religious building - Sanctuary
Type of Operation
Excavation - Research excavation
Institution
Swiss School of Archaeology in Greece
Toponym
Érétrie, Eretria, Nea Psara (124/1960)
Linked Record
200620072014
Report
Eretria. S. Huber (Swiss School) reports on a 2nd (and final) campaign of excavation at the summit of the acropolis. Eleven trenches were opened in 4 different areas to complete the archaeological and architectural study of the Sanctuary of Athena (Fig. 1).
In area 1 the main objective was to explore terrace C, situated below the large rock-cut esplanade of the 3rd Ct BC. Since most of the layers of historical periods were eroded, PH occupation levels were reached quickly. Three N−S walls were discovered, as well as 2 graves of newborn infants, all related to the MBA settlement discovered below in 1995 (AKunst 39 [1996], 107−11). The remaining foundations of the Cl city wall were found W of the esplanade and some 3.8m down; they consist of an exterior facing holding a large volume of blocks and soil.
A find exceptional for the fact of its discovery in an archaeological context is a marble Cyc figurine (Fig. 2), the first to be discovered in Eretria. The head and feet are missing, already broken in antiquity (preserved h. 0.08m). The figurine belongs to the Folded Arms type of the Spedos group, and joins the rare examples found in Euboia (Manika, Magoula and Styra), thus confirming links between Eretria and the Cyclades in the EBA. The NW sector of the sanctuary (area 2, trench 27) collapsed due to the steep slope of the acropolis. Ar sediments were preserved at a great depth, yielding rich finds mainly of terracotta figurines (Fig. 3).
SW of the esplanade (area 3) the trench revealed a small wall making a right angle, the function of which remains unknown. A rocky depression was filled with thick deposits of Hel tableware, animal bones, shells and loomweights. These are probably the remains of meals related to the cult of Athena. Some 15m NE of the esplanade (area 4) a rock-cut (open?) area was cleaned. Two smashed marble plates (of uncertain date) lay on the floor, suggesting a particular function for this small structure.
As in 2006, hundreds of fragments of miniature hydriae and high-neck pitchers were found during the excavations, as well as Ar, Cl and Hel terracotta female statuettes. Among these finds, a terracotta head of Athena and a new fragment of a small Ar Cypro-Ionian limestone sculpture (a zoophoros) can be added to the sculptures found in 2006. More than 50 new fragments complete the series of Ar terracotta reliefs with mounted warriors (some fragments displaying foot warriors could belong to another series).
The 5 campaigns conducted intermittently on the summit of the acropolis since 1993 show that a Sanctuary of Athena was in use from the E6th (or L7th) Ct BC until the E2nd Ct BC. Unfortunately, the remains of this first complex were obliterated by the carving of the rock-cut terrace in the L3rd Ct BC and later by strong erosion since antiquity. Except for a few dispersed coarse wall bases, architectural remains of the Sanctuary of Athena consist of a few fragments of fluted columns and architectural terracottas, originating from 2 different public buildings of modest dimensions which date to the 2nd half of the 7th Ct or the 1st half of the 6th Ct BC. This previously unknown Eretrian sanctuary features poor architectural remains but rich votives and other sanctuary material. This abundant votive material allows us to trace the general history of the sanctuary from the E6th Ct to the end of the 2nd Ct BC.
Author
Catherine MORGAN
Bibliographic reference(s)
Unpublished field report, Swiss School of Archaeology in Greece
Date of creation
2009-12-01 00:00:00
Last modification
2021-04-12 02:46:07
Picture(s) 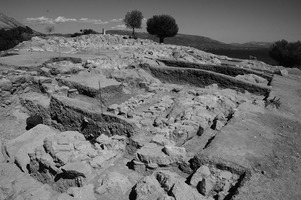 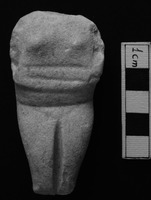 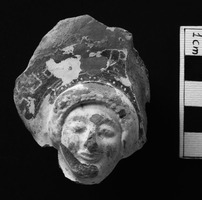