Key-words
Figurine - Metal - Stadium - Sanctuary
Type of Operation
Excavation - Research excavation
Institution
DAI
Toponym
Archaia Olympia
Linked Record
1991199219931994199519971999 (1)199920002002200420052007200820092010201120122013201420152020
Report
Olympia, sanctuary of Zeus. R. Senff (DAI) reports on continuing excavation to the east of the Southeast Complex.
The few remains of the courtyard wall of the bath complex preserved at the western end of Q.13.1 are sufficient to demonstrate that the courtyard closed here and that building did not continue to the east.
In Q 12.2, the surface of the big mortar platform exposed in 2013 follows the natural slope down towards the south. The platform has a solid base of rubble and tile fragments, with an intermediate layer of firm clay ca 0.2m thick. As suggested by the discovery of another large ceramic waster, the platform is probably associated with a potter’s workshop, although it is probably not part of a kiln (the holes in its surface are irregularly arranged and it is not very thick). Shaped like a basin with slightly raised rims, it could be a working surface on top which the clay paste was prepared by treading and mixed with temper.
At the southern end of sondage Q11.1, a further hearth with an ash pit beside it was probably used by visitors to athletic competitions, providing further evidence for the use of this area as a festival camp-ground.
A concentration of metal objects in the northwest corner of Q 12.2, including two iron spearheads, an intact Corinthian helmet and a long sheet of cladding, indicated the filling of a Classical well. Further wells are indicated by accumulations of metal finds and large sherds in Q 12.1, and in uncovering the floor layers in Q13.1 to the west. Finds include three complete bronze greaves, a small bronze Archaic animal figurine, a bronze phiale, a large piece of a Middle Geometric tripod handle, and the leg of a rod tripod with a duck’s head (evidently belonging to the tripod B4314 found in 1958 in the stadium).
In preparation for the publication of the stadium, a trench was opened at the south end of the eastern starting line to check for possible remains of a Roman starting construction such that found at both ends of the western line in 2010 and 2011. It revealed a pit (more than 1m deep) under the ancient race track, which contained stone and brick fragments apparently from destroyed masonry which probably came from a starting mechanism. A similar pit excavated in 2010 contained a lead weight of 238 kg.
Restoration work continued on the masonry of the Ptolemaic dedication.
Author
Catherine MORGAN
Bibliographic reference(s)
Unpublished field report, DAI
Date of creation
2014-07-16 00:00:00
Last modification
2021-03-11 12:53:11
Picture(s)

Fig. 1/ Olympia, sanctuary of Zeus, plan of the excavation area. 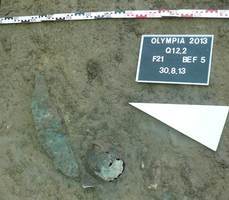 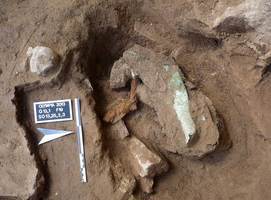 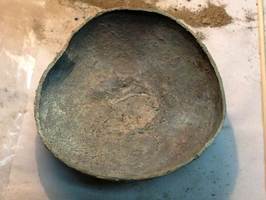 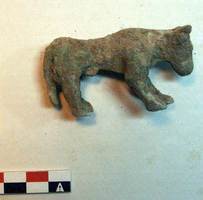