Key-words
Tomb
Type of Operation
Restoration/Conservation/Reconstruction
Institution
ASCSA
Toponym
Kenchreai
Linked Record
2006200720082009201020112013
Report
Kenchreai, Koutsongila. E. Korka (Ministry of Culture) and J. Rife (ASCDA/Vanderbilt) report on cleaning following illicit excavation in the Early to Middle Roman chamber Tomb 2.
The dromos and chamber of the tomb had been excavated in 2009, and the roof of the rock-cut chamber stabilized with scaffolding. The loculi were not examined at that time, but were damaged by illegal incursion. Disturbed fills were therefore removed from the floor of the chamber before loculi V and VI and from inside loculus VI. The disturbed fill in loculus V was not removed or sieved because it did not appear to contain bones or artifacts (it contained mostly decomposed conglomeratic limestone bedrock, plus some finer sediment poured over the burials at the time of interment). The fill associated with loculus VI contained large stones from a mortar and rubble wall that once enclosed the front of the burial compartment but had been dismantled by looters before the modern era. This fill also contained several stones and tiles that once lined and covered the cists inside loculi V and VI. The disturbed fill inside loculus VI contained numerous small sherds of Roman coarsewares and amphorae that do not represent funerary offerings, but were rather used in the mortar lining the compartment. The numerous human bones from loculus VI include all parts of the skeletons of at least two adults (one of whom was a middle-aged male) laid supine and extended, heads to the north. The assorted animal bones include sheep/goat bones that might represent food debris from ancient funerary rituals, but also small species (rodents, birds) which are probably more recent.
Author
Catherine MORGAN
Bibliographic reference(s)
Unpublished field report (ASCSA)
Date of creation
2014-07-16 00:00:00
Last modification
2021-03-02 03:20:00
Picture(s) 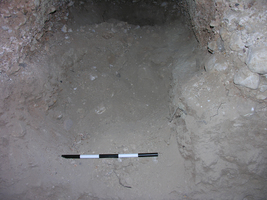