Key-words
Basilica - Tomb - Building Type
Type of Operation
Excavation - Research excavation
Institution
ASCSA
Toponym
Kenchreai
Linked Record
2013
Report
Kenchreai. J. Rife (ASCSA/Vanderbilt) reports on a study season focused on Area TA, the site of an Early Roman funerary monument (late first century AD), an adjacent Early Christian (sixth-century) basilica, and a concentration of 18th- to 19th-century small structures.
The Early Roman tomb (previously published in Hesperia 40 [1971] 205-231) is now seen to have been erected in two phases. First, a narrow chamber, perhaps for a cremation burial or a sarcophagus (3.8 x 3.2m), was built on a shallow platform. There are no associated find with which to determine the date of this structure, but its form fits the Late Hellenistic to Early Roman periods. Thereafter, around the third quarter of the first century AD, an impressive structure (11.1 x 10.4m) was erected around this small chamber, entirely enclosing it. This consisted of ashlar blocks faced with Eleusinian limestone and richly-carved base and crown moldings in Pentelic marble. The building was quite tall, though the surviving architectural members only indicate a flat roof (as an altar-tomb) rather than gabled roof (as a temple-tomb). One explanation for this history is that an important figure in the history of the Roman colony at Corinth was buried here, and then a generation or two later, his burial was monumentalized in order to honour the individual.
Study of the architectural phases and masonry in Area C ( the Roman buildings at the north harbour mole) indicates that the complex originally identified as an Aphrodiseion was in fact a lavish seaside residence. The large gathering hall with mosaic pavement at its northeast corner probably served as an aula, perhaps for entertaining guests, and the southern rooms, which extended southward to the sea in terraces, contained a small bathing facility.
Author
Catherine MORGAN
Bibliographic reference(s)
Unpublished field report (ASCSA)
Date of creation
2014-07-16 00:00:00
Last modification
2018-08-22 09:24:44
Picture(s) 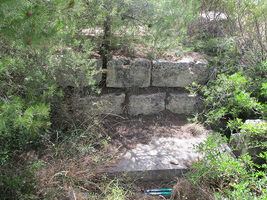 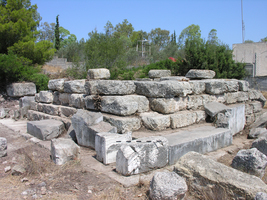