Key-words
Lamp - Numismatics - Dress and personal ornament - Plant remains - Metal - Glass - Religious building - Domestic space - Road system/waterway - Find Type - Material Type - Building Type - Site Type
Type of Operation
Excavation - Research excavation
Institution
ASCSA
Toponym
Archaia Korinthos, Palaia
Linked Record
2013
Report
Ancient Corinth. G. Sanders (ASCSA) reports on excavation south of the South Stoa, in the Late Roman rooms to the south of the Byzantine house and west of the Lechaeum Road South. Some of these rooms had already been excavated to an early seventh-century abandonment phase and others to pre-fourth-century construction levels. In the latter, a pithos remained in situ, and an early fourth-century pit was found filled with carbon, glass, an African Red Slip form 50A bowl, and the burned bust of a young man. Continued excavation of dumped fills in these rooms produced a tiny gemstone (the bezel of a ring) depicting Aphrodite hoplismeni, the fourth such found in Corinth. It probably represents the cult image of Aphrodite in her temple on the summit of Acrocorinth. A second ring bezel found in sixth-century levels to the south depicts one of the Dioscuri and his horse.
A room near the Lechaeum Road South (originally revealed in 1961 and excavated to approximately the same levels) revealed two deep robbing trenches of the walls of a Classical building. This is a further indication that the spaces adjoining the road had no basements, although the rooms further to the west, opening onto the decumanus, did. The preserved hard-packed clay floor associated with this building had traces of burning. As associated fourth-century BC feature is composed of two cut stones set on an approximate northwest-southeast orientation, the southern of which contains a slightly off-centre cylindrical cutting perhaps to support a short wooden post (no traces of ash or other carbonized material were found within the posthole itself). A circular cut in the floor contained a nearly-complete, inverted Late Classical cooking pot of the the second half of the fourth century BC. At some point, perhaps also around this time, a second hard-packed clay floor was laid ca 0.1m above the original floor, against both the posthole feature and the cooking pot. The continued use of both features indicates a continuation in the use of space. Embedded in this same floor, ca 0.3m north of the cooking pot and nearly abutting the posthole, was a shallow depression covered with a thin layer of sterile, white clay and filled with ash. The ash must have been re-deposited in this feature as the clay was unfired. Beneath this and partially embedded in the clay were a fine bronze pin, a bronze ring, and a silvered iron pin with silver head and a molded gold end with a floral design. These items date to the Archaic period and were thus heirlooms deposited in this Late Classical context, perhaps suggesting that this space was a focus of ritual activity.
The posthole feature was put out of use in the late fourth or early third century BC, and covered with a leveling fill dated by echinus bowls and a West Slope body sherd. Perhaps contemporary with this surface was a square paved area constructed of tile fragments embedded in earth –a careful arrangement over the feature which suggests that the place retained its significance. The earth packed around and under the tile feature contained a high concentration of carbonized remains, including many fragments of olives.
A deposit on the west side of the area is at the same elevation as, and relates to, the so called Dye Works excavated in 1965 immediately to the north. The Dye Works had a stone well head, a bench and a tiled floor. In a corner of the southern room were a sixth-century AD micaceous water jar and an almost complete African Red Slip bowl (form 84.1). The new context consisted of a mass of ash, carbon, and fragmentary pottery including a large part of an African Red Slip form 82 bowl and several pieces of early Phocaean Red Slip form 3 bowls. While this pottery would normally be dated to the second half of the fifth century, the coins and lamps found with it suggest a later date. A further context to the north, which seems to be nearly contemporary, contained an almost complete Phocaean Red Slip form 3C bowl stratified over a level of decomposed mud brick mixed with flecks of carbon and containing coins of Anastasius I (491-518) and Justin I (518-27). The amount of burning in these deposits and the deep fills of decomposed mud brick and carbon indicate that they were sealed by or dumped after a violent destruction. Given their date, it is tempting to relate them to the Corinth earthquake of ca 525 AD.
A late 11th-century Byzantine pit and a dumped fill are both given a terminus post quem for their deposition by coins of Nikephoros III (1078-81). Both contained significant quantities of Constantinopolitan Polychrome pottery, confirming the supposed late 11th- to early 12th-century date assigned to this ware.
Author
Catherine MORGAN
Bibliographic reference(s)
Unpublished field report (ASCSA)
Date of creation
2014-07-16 00:00:00
Last modification
2018-08-22 09:24:44
Picture(s) 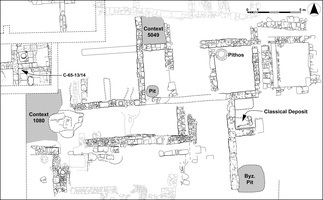 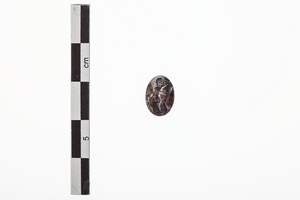 Fig. 3/ Ancient Corinth, ring bezel with one of the Dioscuri.