Key-words
Altar - Figurine - Territory
Type of Operation
Study
Institution
ASA
Toponym
Kato Zakros, Silano
Linked Record
199819992000200220042005200620072009201020112013
Report
Zakros. E. Platon (ASA) reports on continuing study. Pottery from the east and south wings of the palace mostly dates to Late Minoan IB (the final phase of the palace’s establishment) and is domestic in character, comprising drinking and cooking vessels, basins, pouring and storage vessels.
Pottery from the Southwest Sector Building dates to Middle Minoan IIIB/Late Minoan IA (immediately preceding the foundation of the Late Minoan IB palace). It includes near intact small vessels and many sherds of drinking vessels. Chytres, basins, fruitstands, decanters, pyxides, tubs and pithoid shapes. The distinctive decoration of a one-handled cup and a straight-sided pyxis is noted.
Pottery from the House of the Polythron mostly comes from the Late Minoan IB destruction horizon, and is domestic in character. A typical concentration of conical cups and kyathoi in a room with a central supporting column originally led to the assumption that the room had a cult function. But the presence of cooking and pouring vessels in the destruction level in that room refute that hypothesis. Other notable finds are a roughly worked limestone altar and a round impressed mortar with traces of pigment. Among the pottery processed from the building as a whole, a small two-handled vessel similar to a bath tub is noted.
From the Ramp House, attention is drawn to a large prochous/hydria with diagonal band decoration, a mortar-like vessel in limestone, a round pouring vessel in black ophite, an offering table with painted plaster decoration, and part of a terracotta female figure (a long skirt with pieced decoration). Conservation of the metalwork proceeded.
Author
Catherine MORGAN
Bibliographic reference(s)
Ergon (2013), 61-64
Date of creation
2014-07-16 00:00:00
Last modification
2021-04-20 00:12:37
Picture(s) 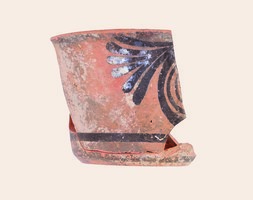 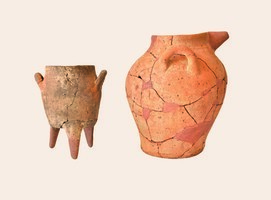 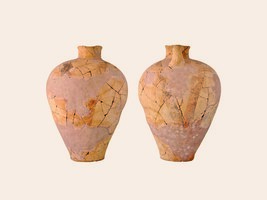 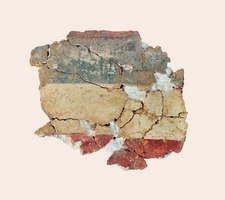 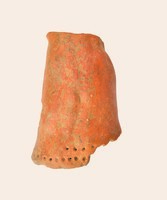