Key-words
Tomb - Dress and personal ornament - Metal - Cemetery - Building Type - Find Type - Material Type - Site Type
Type of Operation
Excavation - Rescue excavation
Institution
ΛΖ' ΕΠΚΑ
Toponym
Korinthos, Corinth
Linked Record
2007
Report
Corinth, ΕΡΓΟΣΕ. A. Giannopoulou, V. Evangeloglou, E. Maragkoudaki and Ch. Pipilou (ΛΖ' ΕΠΚΑ) report the discovery of 74 monolithic limestone sarcophagi (with cover slabs) from an Archaic cemetery during construction of the high-speed railway line at a point north of Acrocorinth, west of the north cemetery and northwest of Cheliotomylos (close to the ancient road to Sikyon).
Tombs began to be located 1.87m below the modern surface, with no evidence of later activity in the area. As in the north cemetery, they were oriented either north-south or east-west. Depending on their depth, they were variously intact, damaged or looted. One was decorated with a red band around the interior. While there is no evidence for grave markers, a few vessels were placed outside the grave (on the cover slab of tomb 14, around the edge of tombs 21 and 60, or both in the case of tomb 55). Outside tomb 27 were traces of a pyre with no associated objects.
The sarcophagi held single inhumations, almost all in contracted position. Fifty had no grave offerings. Four of the 16 child burials contained vases and in the case of tomb 65 also electrum beads. Twenty adult graves held offerings (mostly vases plus a few metal items) usually placed by the legs or around the head (there are isolated instances of offerings on the chest in tomb 20 or around the bones in tomb 62). Nine graves contained iron nails and five (tombs 13, 44, 56, 67 and 72) iron or bronze pins placed on the shoulder of the corpse: one bronze ring was also found. Tombs 28 and 32 held loomweights placed at head level.
The majority of the vases so far studied date from Middle Protocorinthian II (ca 670-650 BC) to Late Corinthian I (ca 570-550). The following observations are based largely on the portion of the material so far conserved and studied. Of the 24 graves with offerings, 16 had up to three items and 8 more than three (the greatest quantity, 14, is in tomb 62). Only aryballoi appear in the two seventh-century tombs (9 and 20), while kotyles and oinochoae (broad-bottomed trefoil forms, handmade Middle Protocorinthian plainware forms and monochrome round-mouthed types of late sixth century - many with lids) predominate in sixth century graves. Other shapes represented in adult and child graves are pyxides (straight-sided, rounded and tripod) with lids (tombs 17, 18, 55 and 62) and kylikes (tombs 18, 55 and 62), plus a mid sixth-century monochrone one-handled cup, a Late Corinthian I omphalos phiale and a lekythos. Only one minature vessel (a Late Corinthian I amphoriskos) was found, aryballoi do not feature in sixth-century graves, and there is no evidence of Attic imports or influences.
A bronze lebes with a limestone cover slab held in place with clay, found just south of tomb 25, was set in a pit the walls of which were plastered with clay and which was in turn sealed with a limestone slab. An East Greek lekthyos, found outside the lebes but stuck to it with clay, dates the the beginning of the third quarter of the sixth century. Inside the lebes were well preserved pomegranate seeds with the impressions of a straw basket, and round aryballoi (including a Late Corinthian I example with a warrior procession). It is not yet clear whether the lebes was used for an enchytrismos, a displaced burial or to contain offerings. An early seventh-century parallel is noted from a rescue excavation in Argos (containing also pomegranate seeds and textile).

Fig. 1/ Ancient Corinth, partial view of the cemetery from the NE. 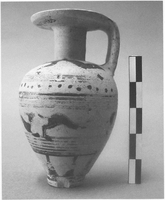 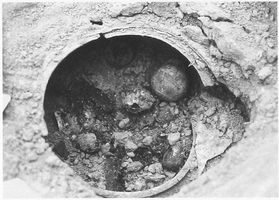