Key-words
Cemetery - Site Type
Type of Operation
Excavation - Rescue excavation
Institution
ΣΤ’ ΕΠΚΑ
Toponym
Diakopton, Diakofto
Linked Record
2005
Report
Kastro, Diakopto (anc. Boura). E.-I. Kolia (ΣΤ’ ΕΠΚΑ) reports the discovery of a cist tomb at the site of Ai-Lenti (beside the farm track to Ag. Apostoloi). The grave, which had been robbed in antiquity, was built of small stones: a few Hellenistic sherds and tile fragments, and a little bone, were collected from fill by the preserved short side. Beside the farm track from Ai-Lenti to Kastro, an enchytrismos in a plain vessel (probably a child burial although no bones survive), contained a small kantharos and three miniature kotyles dating to the second half of the sixth century, plus a severely corroded iron object. Just to the north was a Roman cist grave with a plaster floor.
Author
Catherine MORGAN
Bibliographic reference(s)
ADelt 60 (2005) Chr. B1, 365
Date of creation
2014-07-10 00:00:00
Last modification
2018-08-22 09:24:44
Picture(s) 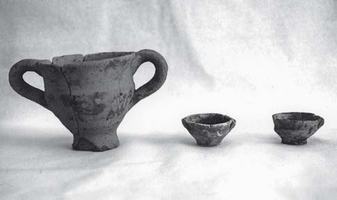