Key-words
Domestic space - Road system/waterway - Site Type
Type of Operation
Excavation - Rescue excavation
Institution
ΣΤ’ ΕΠΚΑ
Toponym
Kato Kastritsi
Linked Record
19952005
Report
Kato Kastritsi, Rion, 2nd cross-alley on Thrakis Street. L. Papakosta (ΣΤ’ ΕΠΚΑ) reports the discovery of prehistoric (mostly LH III) settlement remains at the foot of a hill above the University of Patras. Nine rooms were identified. Rooms I-IV and probably also VIII were contemporary: stone deposits related to their destruction lay over the entire plot. Room I (4.48x3.9m) preserves part of a stone-paved floor (with a gravel foundation course): a destruction layer over the floor extends beneath neighbouring later walls. A road ran beside it. Remains of a second, older phase comprise one wall and the fire destruction of Room VII. Two earlier phases were revealed in Rooms VI and IX (although it is unclear whether they overlapped chronologically). Room I was built as an addition to Room VI, which was founded at a lower level in part within a destruction deposit with strong signs of burning. A terracotta hearth lay in the east corner of Room VI, with (immediately to the north) a sunken structure probably for charcoal burning: remains of the mud-brick superstructure were found within the room. To the east, a stone floor or road extended to the property line. Excavation was not continued below the level of the architectural remains, but a trial trench in the west part of Room VI produced Middle Helladic sherds at a depth of 7.33m beneath the overlying road surface.
Author
Catherine MORGAN
Bibliographic reference(s)
ADelt 60 (2005) Chr. B1, 352-354
Date of creation
2014-07-08 00:00:00
Last modification
2018-08-22 09:24:44
Picture(s) 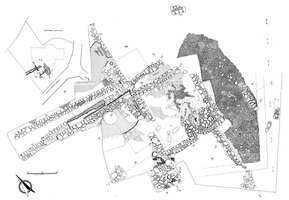