Key-words
Figurine - Lamp - Cemetery - Find Type - Site Type
Type of Operation
Excavation - Rescue excavation
Institution
Ζ’ ΕΠΚΑ
Toponym
Arsinoi, Simiza, Semiza
Linked Record
2005
Report
Arsinoe, Church of Agia Marina. X. Arapogianni (Ζ’ ΕΠΚΑ) reports the removal of two stone architectural members to the Museum of Ancient Messene.
1) An early Christian inscription in low relief (tabula ansata) on the upper part of a block:
ΑΦΡΟΔΕΙ
CΙΕ ΧΑΙΡΕ
ΖΗCΑC Ε
ΤΗ < / < 5
2) The almost complete limestone base for a funerary stele, in the form of a low throne with relief lion paws at the edges.
West of the church, on the property of P. Petropoulou, two third- to second-century BC cist tombs were found during the opening of a drainage ditch. Tomb I (1.75 x 0.4m), of limestone slabs, contained one extended inhumation and three displaced burials pushed to the ends of the grave. A one-handled cup and a lachrymaterion were placed on the pelvis, while at the feet were a bone astragalos, fragments of an iron strigil and knife, and two lachrymateria. At the south end of the grave, beneath two of the displaced crania, were two bronze mirrors, fragments of a bronze knife, a lachrymaterion, and two lamps. Following the removal of these burial remains, came two pyxides, two amphoriskoi, a plate, a black glaze feeding bottle with lid, and a miniature pyxis. A limestone pedimental grave stele was set over the tomb. Cleaning outside the tomb produced an iron knife, a bronze mirror handle and a pyxis lid.
Tomb II (1.7 x 0.43m), 5.8m to the west, had been looted and badly damaged. Sherds and a female terracotta figurine were recovered from the fill.
Author
Catherine MORGAN
Bibliographic reference(s)
ADelt 60 (2005) Chr. B1, 319-322
Date of creation
2014-07-07 00:00:00
Last modification
2018-08-22 09:24:44
Picture(s) 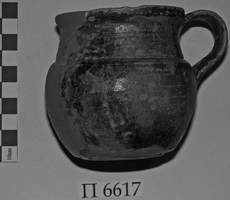 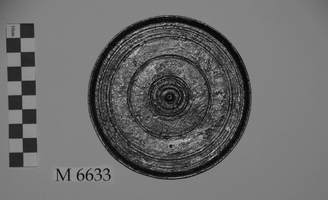 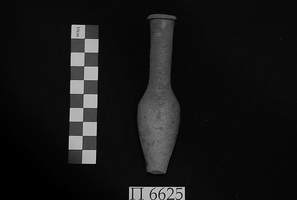 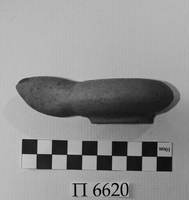 Fig. 7/ Arsinoe, Tomb I, side view of the previous lamp 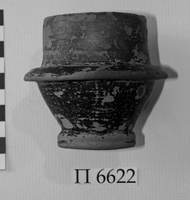 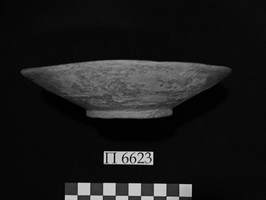 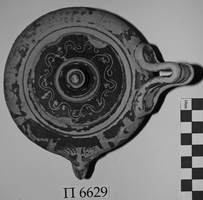 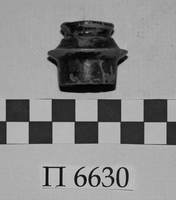