Key-words
Domestic space - Sanctuary - Site Type
Type of Operation
Excavation - Research excavation
Institution
Ζ’ ΕΠΚΑ
Toponym
Platiana
Linked Record
2005
Report
Platiana. X. Arapogianni (Ζ’ ΕΠΚΑ) reports on further excavation on terraces III and IV, focused on Buildings D and E, and the rectangular base in area D (in the east part of terrace IV).
Building E (6.5 x 4.8m, oriented east-west), in the east part of terrace III, south of Building Γ, was built of roughly worked blocks of local limestone (with the exception of the west wall, which contained smaller stones). The internal courtyard (4.8 x 3.5m) was defined by stone walls to the south and east: that to the east lay beyond an area paved with reused stone slabs, and contained the main entrance to the building. The thickest part of the paved surface included an earlier construction. The south wall, which had two external buttresses, served as a retaining wall for the overlying plateau. A narrow, paved open-air passage ran between the two south walls. Removal of the surface deposits within the building revealed a layer containing fragments of plaster and Laconian rooftiles which overlay a thick destruction deposit which did not extend into the western part of the building. Beneath this, and over the beaten earth floor of the building, was a layer containing ash and red and white painted plaster (the plaster found by the north wall indicates marbling). This floor was at a lower level than the paved surface, which is thus later in date. Close to the west wall of the building was a stone base (3.4m long, oriented north-south, occupying the entire interior width of the building); this was set on a partially preserved footing built of four blocks of local limestone which had a cyma pattern in low relief on the upper part of the front face. While the function of the base is unknown, it accords with the proposed public character of the building. Few portable finds were recovered, and the proposed Hellenistic date of the building is established mostly on architectural grounds.
West of Building E, a flight of three stone steps oriented north-south linked the lower and upper terrace levels. This was bounded to the east by the west wall of Building E and to the west by a low wall of fieldstones set on bedrock. North of the steps lay the bedrock outcrop which underlay the foundation of the northwest corner of Building E.
In the eastern part of terrace IV, west of the modern Church of Profitis Ilias, was a rectangular stone ‘base’ (5.7 x 1.2 x 0.3m) with a semi-circular stone exedra (covering an area of ca. 3.5 x 4m) on a large plateau immediately to the west. The rock in front of the exedra had been trimmed level. A Γ-shaped foundation (1.9 x 1.2 x 0.3m) ca. 3m south of the exedra bore three small rectangular cuttings in the upper face. Just south of this foundation was a small cist grave (0.9 x 0.5m) of limestone slabs containing a child burial but no grave goods. It probably dates to the Christian period, as the similar grave found in 2004 on the south end of the ‘base’. The ‘base’, exedra and foundation are together interpreted as an open air cult complex which likely extended onto the overlying plateau to the west.
Building D (6.3 x 3m internally, oriented east-west), lay to the north of the one-roomed Building B. Built of large roughly worked blocks of local limestone and founded on bedrock in places trimmed to form a level floor, it had a threshold in the centre of the south wall. Pieces of decorative wall plaster were found over the fallen Laconian rooftiles. The south wall bore white plaster on the exterior, suggesting that the entrance way had a projecting roof. Finds from the interior of the building were generally poor and not indicative of function (with the exception of the stone basin of a perirrhanterion and a stone table support found in the southern part). A Hellenistic date is consistent with the little pottery recovered (including moulded bowls from the lowest excavated level). The building appears to have fallen into disuse gradually rather than in some sudden episode of destruction.
Author
Catherine MORGAN
Bibliographic reference(s)
ADelt 60 (2005) Chr. B1 310-312
Date of creation
2014-07-04 00:00:00
Last modification
2018-08-22 09:24:43
Picture(s) 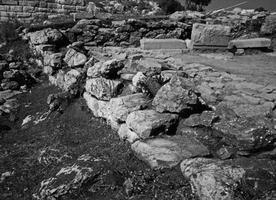 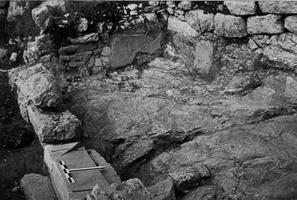