Key-words
Numismatics - Painting - Domestic space
Type of Operation
Excavation - Rescue excavation
Institution
Γ' ΕΠΚΑ
Toponym
Athens South (Makrygianni, Koukaki, Kynosarges, Mets), Athènes centre-Sud
Linked Record
2005
Report
46 Erechtheiou Street. †P. Bougia (Γ ΕΠΚΑ) reports the discovery of a damaged anthemion stele and part of a kioniskos during the demolition of walls. Further investigation revealed the foundations of the north part of a peristyle courtyard with a cistern at the northeast edge, and sections of rooms around it. The corner of a strong Late Roman wall was also found, plus fragments of a wall and water channel.
The lower foundation courses of the south end of a large house were identified in the northwest of the plot, with an entrance and adjacent staircase to the first floor. Part of a peristyle courtyard lay to its south, and sections of areas to the east and west of the courtyard, all built with architectural spolia. A destruction layer contained numerous fragments of wall paintings, bronze coins of the 2nd-1st centuries BC, and pottery of the late 1st century BC. A cistern had been cut into the northeast corner of the courtyard, its mouth covered by a T-shaped block.
The corner of a strong wall of squared blocks in the southwest part of the plot may belong to the southwest continuation of the late fourth- or early fifth-century AD so-called ‘House of Proclus’: if not it must be associated with a second Late Roman urban villa excavated in 1955 by Miliadis immediately to its west.
Author
Robert PITT
Bibliographic reference(s)
ADelt 60 (2005) Chr. B1 86-88
Date of creation
2014-07-04 00:00:00
Last modification
2020-02-10 12:17:00
Picture(s) 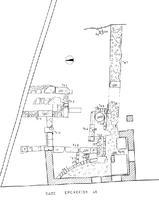 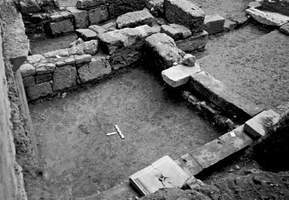 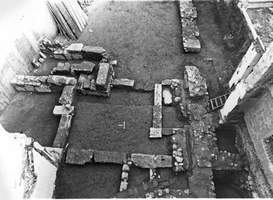